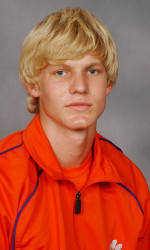 Indianapolis, IN – Miller Moss of the men’s track & field team earned junior All-America honors on Thursday at the USA Outdoor Championships at Michael A. Carroll Stadium. It marks the third straight year the Tiger program has had a junior All-American. Mitch Greeley (2005) and Bryce Iverson (2006) earned the honor in the pole vault and 5000m, respectively.

Moss, a native of Sumter, SC, red-shirted the 2007 indoor and outdoor seasons. He totaled 6,774 points over the two-day slate. Nick Adcock of Missouri claimed the title with a total of 7,293 points.

On day two, he started off with a time of 15.89 in the 110m hurdles. Moss followed with a solid effort in the discus, recording a throw of 125’4″ to finish fifth-best overall in that event. He had a clearance of 13’5.25″ in the pole vault, then threw the javelin 135’10”. He fouled on his first throw and passed on the third attempt. Moss was again outstanding on the track in the final event of the grueling competition, the 1500m run. He had a time of 4:43.05. His time was better in that event than any recorded by a Tiger multi-event athlete during the 2007 season.

Chris Spear also competed Thursday, but did not clear his opening height in the pole vault. Alex Padgett will compete Friday morning in the hammer throw to wrap up Clemson’s action at the junior nationals.