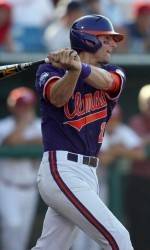 Clemson rising junior shortstop Brad Miller was one of 22 players named to the 2010 USA Baseball National Collegiate Team roster on Sunday. The team was selected after seven days of trials that included six intrasquad games and practices at the USA Baseball National Team training complex in Cary, NC.

Miller is one of three returning players who played on the 2009 National Team and is the first two-time member from Clemson since Jeff Baker played on the team in 2000 and 2001.

After several series overseas and in the United States, Team USA will close its summer season at the FISU World University Championships at Tokyo, Japan from July 30 to August 7.