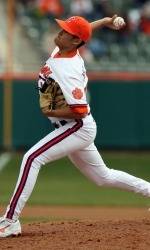 Jonathan Meyer (2-0) pitched 4.1 superb innings in relief to earn the win. He allowed just two hits, no runs, and one walk with five strikeouts. Starter Dominic Leone struck out six batters in 4.2 innings pitched, but he did not factor in the decision. The two Tiger hurlers combined for 11 strikeouts against only two walks.

David Carroll (5-2), the first of four Terrapin pitchers, suffered the loss. He gave up seven hits, six runs (five earned), and two walks with one strikeout in 3.0 innings pitched.

The Tigers took the game’s first lead in the second inning. Miller led off with a groundball single through the left side and Chris Epps walked on five pitches. After Will Lamb bounced a single up the middle to score Miller and Epps. After Lamb stole second, he moved to third on a passed ball as John Hinson singled through the right side to plate Lamb, then Jeff Schaus followed with a two-out single through the right side to bring home Pohl and give the Tigers a 5-0 lead.

Miller led off the third inning with a double off the centerfield wall on the 11th pitch of his at-bat and advanced to third on Epps’ groundout to first. Kieboom followed with a double to right-center to score Miller.

In the fifth inning, Tim Kiene hit a one-out single through the right side and went to second on Austin Kilbourne’s single to left field. After both runners moved up a base on a passed ball, Korey Wacker slapped a single through the left side to score Kiene. Charlie White walked to load the bases and Alfredo Rodriguez struck out for out #2. But Ryan Holland belted a single up the middle to score Kilbourne and Wacker, cutting Clemson’s lead to 6-3.

Clemson put together a two-out rally to add four runs to its lead in the sixth inning. Pohl grounded a 1-2 pitch through the left side for a two-out single and Schaus walked. Richie Shaffer then grounded another single through the left side to score Pohl. Miller followed with a triple to right field that scored Schaus and Shaffer, while Miller also scored on the play when Rodriguez’s relay throw sailed into the Maryland dugout.

In the seventh inning, Kieboom led off with a walk and went to third on Lamb’s double through the right side. Two batters later, Hinson hit a sacrifice fly to right field to score Kieboom, then pinch-hitter Dominic Attanasio laced a two-out triple to right-center to plate Lamb.

Kiene and Kilbourne had two hits apiece to pace Maryland, who had eight hits in the contest. Holland had a team-high two RBIs as well.

Clemson and Maryland will play game-two of the three-game series on Saturday at 7:00 PM.