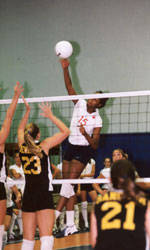 Malibu, CA – The Clemson volleyball team dropped a 3-0 decision to the Michigan Wolverines on Saturday on the second day of the Howdy’s Pepperdine Classic. The Wolverines improve to 2-0, while the Tigers fall to 0-2 on the season.

Clemson will face South Florida tonight at 7:00 p.m. (PT) on the second day of the Howdy’s Pepperdine Classic.