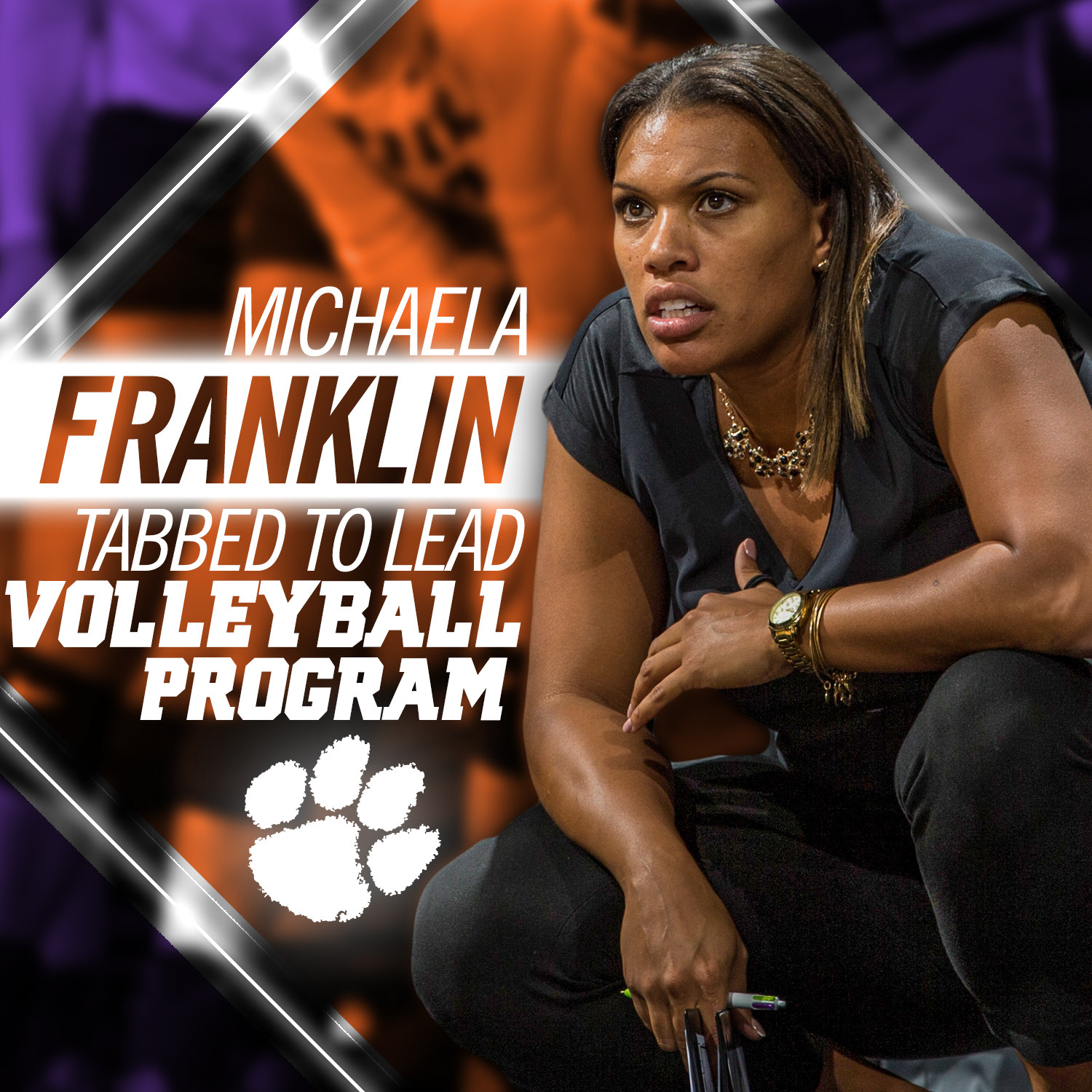 Michaela Franklin has been named Clemson head volleyball coach, Director of Athletics Dan Radakovich announced today. Franklin has been associate head coach at Iowa since the spring of 2014 after stops at Green Bay (2013), Marquette (2009-12) and Northern Illinois (2006-08) following her playing career at Kansas State (2002-04).

“The minute I stepped on campus and met with the committee immediately I felt a connection with the people. As the day went on I fell more in love with Clemson because of its elite level atmosphere with a family feel,” Franklin said. “I would like to thank Dan Radakovich and the entire search committee for their due diligence and dedication to the search. I’m looking forward to hitting the ground running and getting to campus to work with my team.”

“Michaela wowed our search committee with her enthusiasm and organization and she stood out among an extremely impressive pool of candidates,” said Athletic Director Dan Radakovich. “I’m confident the future of Clemson volleyball is in great hands given her passion for recruiting and developing student-athletes, as well as her experience competing and coaching at the highest levels of collegiate volleyball.”

Last season, Iowa finished 19-13 overall with victories over #17 Purdue and #24 Illinois. Franklin joined Iowa after spending the 2013 season as the head volleyball coach at Green Bay. The Phoenix accomplished a 9-5 mark in Horizon League action, and Franklin had four players receive Horizon League honors at the end of the season, including three all-league selections and the conference Freshman of the Year. It was only the second time in Green Bay history three players earned all-league nods and the first time in school history the Phoenix had a freshman of the year and a total of four postseason honorees.

Prior to her time at Green Bay, Franklin spent four seasons coaching alongside current Iowa head coach Bond Shymansky as an assistant coach at Marquette. While there, she served as the team’s recruiting coordinator, trained the outside hitters and was the defense coordinator. The Golden Eagles appeared in back-to-back NCAA Tournaments in 2011 and 2012, and finished second in the Big East Conference in 2012 with a 13-2 record.

Franklin began her coaching career as an assistant coach at Northern Illinois from 2006-08.

Franklin played collegiate volleyball at Kansas State from 2002-04, where she helped the Wildcats to a Big 12 Championship and three NCAA Tournament appearances including a berth in the Sweet 16. The Lincoln, Neb., native graduated with a bachelor’s degree in family studies and human services in 2005.