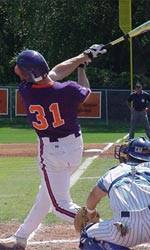 Johnson hit the game-winning home run in Clemson’s 9-7 victory over South Carolina on Saturday and blasted two more home runs and a double on Sunday as the Tigers defeated the Gamecocks 11-10 in 10 innings. The junior leads the team with four home runs on the season and is the second Tiger to be named Player of the Week by the ACC in 2002. Jeff Baker shared the honors with NC State’s Tim Coffield last week.