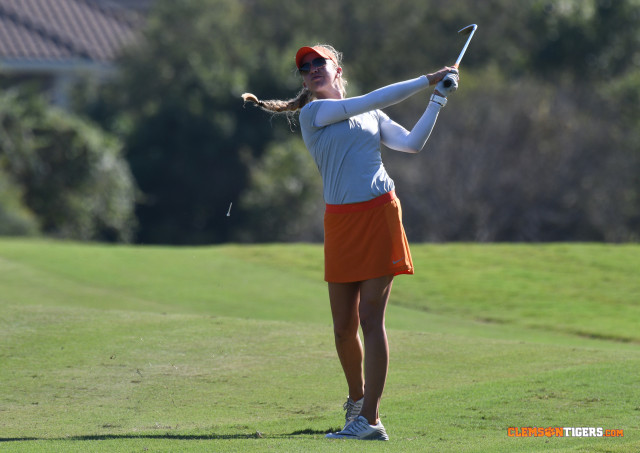 Clemson, S.C.—Clemson women’s golfer Marisa Messana is one of three Clemson athletes to receive the Weaver-James Corrigan Award as presented by the Atlantic Coast Conference. The ACC made the announcement on Wednesday.

Messana is a four-year starter on the Clemson women’s golf team and graduated in December with a perfect 4.0 GPA. She continues to play on the Clemson team this spring as a graduate student.

On Tuesday Messana shot an even-par 72 to help the Tigers to a victory at Houston Dickson college golf tournament at The Woodlands in Texas. That was the 100th round of her career and she is just the second Clemson women’s golfer to play 100 rounds.

Messana and 51 other student-athletes from around the ACC will be honored at the annual Cone Health ACC Postgraduate Scholarship Luncheon presented by ESPN on April 11. The luncheon will be hosted by the Nat Greene Kiwanis Club at the Sheraton Four Seasons Hotel Imperial Ballroom in Greensboro.

The Weaver-James-Corrigan scholarships are awarded to selected student-athletes who intend to pursue a graduate degree following completion of their undergraduate requirements. Each recipient will receive $5,000 toward his or her graduate education. Those honored have performed with distinction in both the classroom and their respective sport, while demonstrating exemplary conduct in the community.