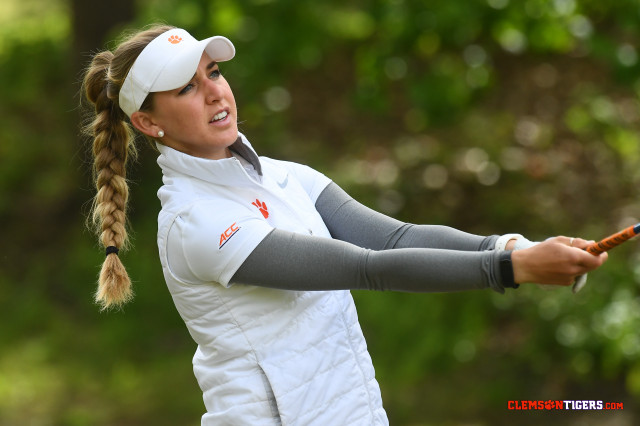 Clemson, S.C.—Clemson golfer Marisa Messana has been named a Strength All-American by the National Strength and Conditioning Association.  Messana is the first Clemson women’s golfer to receive the honor.

The native of Fort Lauderdale, Fla. was one of just five Division I women’s golfers honored with the award from the NSCA. The others were Lisa Maguire of Duke, Tiffany Breitenwischer of TCU, Emma Martin of TCU and Nikki Long of Texas-San Antonio.

Messana finished her career ranked first in Clemson history in tournaments played (40) and rounds (115) and second in birdies (216). She is the first player in school history to start for four years.   Clemson advanced to three NCAA Tournaments and had a No. 20 final ranking in 2017.

In making the release, the NSCA said, “Marisa Messana has shown tremendous work ethic, drive, and determination throughout her entire time at Clemson. She has passion about her development and incredible attention to detail that have served her well in her training.

“She is a tireless worker that always seeks out what more she can do to continue to improve, from extra sessions to improve strength and power, to mobility work, and learning more about sleep habits, and nutrition. Her effort has shown in the weight room, winning the team’s Grit Day competition back-to-back years.”

Messana earned her degree from Clemson in three and a half years with a perfect 4.0 GPA. She started work on her Masters degree in the second semester this past spring. She helped Clemson to a program best third-place finish at the 2018 ACC Championships. The Tigers finished tied for sixth at the Tallahassee Regional two weeks ago, missing a trip to the NCAA National Tournament by just one shot.

Messana won a Weaver-James-Corrigan Scholarship from the Atlantic Coast Conference this year, the first Clemson women’s golfer to win the award.