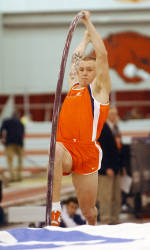 Trenton Guy was runner-up in the 60m dash with a time of 6.79. He posted a provisional NCAA qualifying time in the prelims Friday. Christopher Davis of North Carolina Central edged him at the line (6.76). Gwantaveus Anderson was eighth (6.91) and Kendall Millhouse (6.97) finished ninth for the Tigers.

Scott Pauga was fourth in the high jump in his debut for the Tigers. The sophomore transfer cleared 6’6.25″. Josh Fowler was 11th in the triple jump, as he posted a mark of 45’1.5″ on his third and final attempt of the preliminary round.

Alex Padgett was seventh place in the shot put. The red-shirt freshman had a mark of 50’3.5″. Stephen White, a first-year performer from Beaufort, SC, was eighth with a throw of 48’1.75″.

The team will take a break before returning to the track in January. The Tigers travel to Blacksburg, VA for the Virginia Tech Invitational on the 11th and 12th of the month.