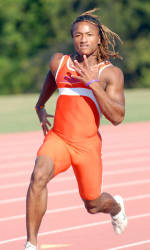 Clemson, SC – The men’s track & field program will host over 20 schools this weekend at the Clemson Invitational. The meet, which will be held Friday and Saturday, will be a scored team competition. The Tigers won the men’s team standings last season, well ahead of second-place finisher Auburn.

Portions of Saturday’s meet will be available on the Internet via ACC Select. The action will be available for viewing on-demand on Sunday, January 20 at 5:00 p.m. and can be accessed by clicking on the link below:

Travis Padgett has headlined Clemson’s start to the 2007-08 indoor season. The junior from Shelby, NC posted an automatic NCAA qualifying time in the 60m dash at the Clemson Opener. He ran a 6.62 in the prelims, which remains the fastest time in the country so far this season. The reigning ACC Performer-of-the-Week will compete Friday at 6:20 PM.

Joining him in the 60m prelims will be freshman sensation Trenton Guy, the team’s top performer in the 200m dash this season. Guy and Padgett will both compete in Saturday’s 200m dash, as well as standout sprinters Corey Brown and Cowin Mills. The 60m final is Saturday at 11:30 AM, while the 200m will be 2:40 PM.

Mills has been the team’s top performer in the 400m dash this season. He will be joined by Travis Swaggard, Colin Abercrombie, and Brown in the event at 12:50 PM Saturday. Jasen Turnbull and Andrew Porter are slated for the 800m, while Sam Bryfczynski, Chad Holt, and Tyler Morey lead Clemson’s efforts in the mile.

The Tigers will run its full field of distance runners this weekend, led by All-ACC standout Matt Clark. He will compete in Saturday’s 3000m run at 3:40 PM. Joining him in the event will be Canadian freshmen standouts Matt Bruce and Matt Hughes, as well as veteran Bryce Iverson. Bryfczynski, Iverson, and Jonathan Sunde are entered in the 5000m competition Friday evening.

Clemson will enter a team in both the distance medley relay and 4x400m relay. The DMR team will be comprised of Holt, Mills, Chris Slate, and Morey.

The Tiger field event athletes will see a full weekend of action as well, starting with the long jump and weight throw Friday. George Fields will not compete in the long jump, but Josh Fowler and Conner Webb are entered. In the weight throw, Zach Berg and Alex Padgett lead the way for the Tigers.

Saturday’s field action gets underway with the high jump and shot put at 11:00 AM. Alex Padgett has shown steady improvement in the shot put and currently holds the top mark on the team. Scott Pauga has the top mark in the high jump for Clemson, and he will be joined by Fowler and Webb in the event this weekend.

Fowler will be Clemson’s lone competitor in the triple jump (1:00 PM), while four student-athletes are slated for the pole vault at the same time. Joey O’Rourke, John Oberg, and Miller Moss are scheduled for the vault.