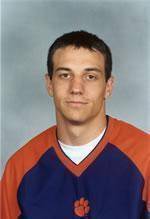 Winston-Salem, NC – The Clemson men’s track & field team stands in first place after two days of competition at the ACC Outdoor Championships. The Tigers captured two event titles on Friday, the high jump and decathlon. Adam Linkenauger won the high jump title, giving him his third consecutive sweep of the indoor and outdoor event and his sixth ACC title overall. Ryan Koontz won the decathlon, meaning he swept the indoor and outdoor multi-event competitions in 2006.

Other All-ACC performers for Clemson on Friday were Brent Hobbs in the decathlon, and Itay Magidi in the 3000m steeplechase.

Linkenauger cleared 6’11.75″ to claim the high jump in his first competition this outdoor season after being held out due to medical reasons at previous meets. His mark was a regional-qualifying effort. Fields (6’2.75″) and Koontz (no height) also competed in that event for Clemson.

Koontz’ decathlon total was 7,371 points, which is an NCAA provisional qualifying effort. It also ranks fourth all-time in school history. His best events on Friday were the 110m hurdles and javelin, where he finished second in both. Hobbs was runner-up to earn his second All-ACC honor in the decathlon. He surpassed a regional-qualifying mark in the high hurdles with a time of 14.29. Mike Feathers finished fourth with 6,642 points. In total, Clemson scored 23 points in the decathlon.

In the long jump, Fields was runner-up to earn the first All-ACC certificate of his career. He posted a personal best mark of 24’9.75″, which was good enough for a regional qualifier. It marked the fifth straight year Clemson has had an All-ACC performer in the long jump. Jason Bell also competed in the event and hit a mark of 23’0″.

Magidi earned his third All-ACC honor in the steeplechase after crossing the finish line with a time of 8:55.49 in third position. It was a regional-qualifying mark for the Israel native. Sean Reilly also competed in the steeplechase but did not score.

In the 100m, Travis Padgett qualified for Saturday’s 2:25 PM final with a time of 10.40, which was second-fastest in the prelims and another regional mark for the freshman. In the 200m, Corey Brown was fourth overall and will compete in Saturday’s final after running 21.51. In the 400m, Brown was ninth and just missed qualifying for that final.

In the high hurdles, three Tigers will compete in Saturday’s 1:50 final. Brent Hobbs (14.56) was eighth. Three Clemson athletes also qualified for the intermediate hurdles final on Saturday at 2:55. Leading the way in third was Andy Porter with a time of 52.60. Rashad Gardner (52.73) was sixth-fastest and Cheney was eighth (53.03).

The Tigers return to action on Saturday to wrap up competition at this year’s ACC Outdoor meet. The first event for Clemson will be the pole vault at 12:00 PM.