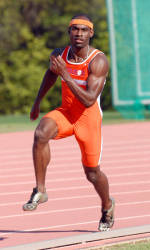 Atlanta, GA – A handful of men’s track & field athletes from Clemson competed Saturday in a rain-shortened Yellow Jacket Invitational at the George C. Griffin Track complex on Georgia Tech’s campus. Only half of the events were completed due to the inclement weather.

Cowin Mills posted a strong performance in the quarter mile. The senior from Elkins Park, PA had a time of 47.65 on Saturday, which was sixth-best overall among 30 competitors. The 47.65 was shy of a regional-qualifying time, but was Clemson’s best effort of the young season in the 400m dash. In the 1500m run, red-shirt sophomore Sam Bryfczynski had a personal best time of 3:56.29 and was 11th in the field of 50 runners.

George Fields placed third in the long jump in his first outdoor meet of the season. The junior from Columbia, SC hit a mark of 23’3.5″ on his final preliminary jump, which proved to be his best leap after three additional attempts in the finals. Chris Spear was tied for second in the pole vault with a 16’0.75″ clearance, one week after he did not clear a height at the Clemson Relays.

Alex Padgett was 11th in the shot put Saturday. He had a toss of 51’0.75″ on his final preliminary attempt, but did not advance to the finals. On Friday, he competed in the hammer throw where he was 15th with a mark of 172’10”. Scott Pauga had a season-best in the javelin throw Saturday, finishing sixth overall with a mark of 171’5″.

The team will return to action next weekend at various locations due to the cancellation of the scheduled Clemson Invitational on April 5. The Tigers will compete at the Stanford Invitational, Texas Relays, and Auburn Tiger Classic.