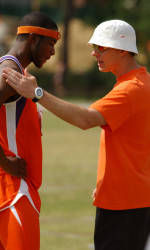 The Clemson men’s track & field team had five performers on Saturday at the Virginia Tech Last Chance Qualifier. Leading the way for the Tigers was junior Jason Bell, who posted his third NCAA provisional mark in the triple jump. However, he did not top his season-best mark.

Roy Cheney ran an 8.04 in the prelims before finishing fourth in the finals with an 8.02. He did not post a provisional mark on Saturday.

Bell finished fourth in the triple jump with a leap of 51’0.25″. His season-best was a 51’6.25″ mark in the Virginia Tech Invitational earlier this indoor season. In the weight throw, Danny Alge recorded a toss of 60’6″, but did not improve on his season-best mark.

The NCAA Indoor Championships will be held next weekend in Fayetteville, AR.