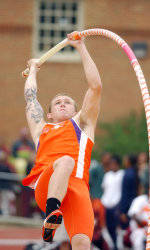 The 4x100m relay team of C.J. Spiller, and Jacoby Ford posted the top time this season for Clemson. A red-shirt sophomore, Brown broke away from a pack to give the Tigers the lead for good. The team won with a time of 39.78 in their first-ever action together.

Padgett continued his success in the 100m after winning with a time of 10.05, his season-best and among the national leaders in the event. His time was not officially wind-aided, although there was a strong wind behind him. Ford posted a regional time at 10.33 and was runner-up, while Brown (10.37) and Spiller (10.41) finished third and fourth. Both posted regional-qualifying times as well.

In the 200m dash, Corey Brown won the event with a regional-qualifying time of 21.05. Padgett was third at 21.37, a personal best. Cowin Mills had a time of 21.51 and was fifth-best on the afternoon. Mills was also first in the 400m dash with a time of 49.06. Ford and Spiller, who participated in Saturday’s football scrimmage in the morning, did not run the 200m dash.

Ryan Koontz was runner-up in the 110m high hurdles with a time of 14.42 seconds. Joey O’Rourke was eighth overall at 15.82. In the intermediate hurdles, Andrew Porter was runner-up with a time of 53.91. The runners faced a strong head wind in the final 200m of the race. Travis Swaggard had a time of 54.26 and was fourth.

Sean Reilly finished runner-up in the steeplechase. He posted a season-best time of 9:46.25 and was second to Ryan O’Keefe of Appalachian State. Jay Lumpkins (15:30.03) was runner-up.

Jason Bell won the triple jump crown in his first action of the season. The senior from Warner Robins, GA jumped 50’1.75″, which is good enough to qualify for the NCAA Regionals in Gainesville, FL next month.

The Tigers return to action next Saturday (April 14) for the Solid Orange Classic, which will serve as a final tune-up for the ACC Championships on April 19-21.