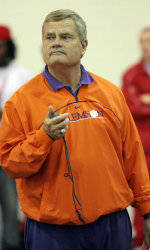 Clemson, SC – The men’s track & field team has announced the addition of 11 student-athletes to National Letters-of-Intent, Head Coach Bob Pollock said Wednesday. The Tigers have filled some significant gaps for the 2007-08 team and have strengthened several areas as well.

“This is clearly one of the best classes we’ve signed in a long time,” Pollock said. “Not only did we sign some great athletes in the class, but also some great character guys. We feel this is a solid group that should be able to help us right away in 2007-08. There’s no question about that.”

The headliner of the class is Trenton Guy, Jr., a sprinter from Charlotte, NC. A cousin of current red-shirt sophomore Corey Brown, he is the reigning 4A state champion in the 55m dash as well as 300m. He won the 200m competition with a personal best time of 21.09 seconds at the National Scholastic Indoor Championship this year, and earned All-America honors in the 60m dash at the prestigious meet as well. He was recently named North Carolina’s Runner-of-the-Year by the Charlotte Observer.

Kendall Millhouse also signed a letter of intent to compete in the sprints. The Summerville High School product was the leading rusher for John McKissic’s (nation’s winningest high school football coach) Green Wave football team. He recently earned region championship honors in both the 100m and 200m dash. He owns personal bests of 10.78 in the 100m and 21.65 in the 200m.

Chad Holt signed with the Tiger program out of Mauldin, SC. A Mauldin High School senior, he won the 4A state title in cross country in 2005. Holt was also All-State in cross country in 2004 and 2006 and in track from 2005-07. He is also a two-time region champion in the mile and two-mile track events. Holt also holds the Mavericks’ school record in the mile (4:21.7).

Tyler Morey, a native of Combined Locks, WI, was an All-State selection in 2005 in cross country and a third-place finisher at the state track meet in the 1600m this season. Morey, class president at Kimberly High School, was a Wendy’s High School Heisman finalist. The two-time All-American in cross country also owns personal bests of 4:20.87 in the mile and 1:56.38 in the 800m.

Jasen Turnbull comes to the Tigers via Northville, MI. He earned All-America honors at the 2006 Junior Olympics in the 1500m. Turnbull also placed third at the Michigan state championships in 2006 in the 1600m with a time of 4:19.22. A two-time team MVP for cross country and track at Northville High School, he owns a personal best of 1:53.9 in the 800m.

Chris Slate signed his letter of intent in the fall, the lone signee during that period for Clemson. A product of Wilmington, DE, he attended Concord High School. Slate was a two-time All-State selection in cross country and second-team All-State performer as a sophomore. He won the Delaware Interscholastic Athletic Association (DIAA) Division II 800m and 1600m events as a junior. Slate owns personal bests of 1:56.2 in the 800m and 4:20 in the mile.

Cameron Cheek, a native of Lavonia, GA, is returning to Clemson. He lived in the area for a portion of his childhood. He was the 5A state champion in the pole vault with a 15’7″ clearance. The Mill Creek High School standout holds a personal best of 16’1″ in that event. He owns the 5A pole vault record in the state of Georgia.

Stephen White of Beaufort, SC signed to compete in the throws for the Tigers. Most recently, he led Beaufort High School to a runner-up finish in its 4A region after winning the shot put title and finishing runner-up in the discus throw. He also recently won the shot put with a personal best 56’8.5″ at the 2007 Taco Bell Classic in Columbia, SC.

Conner Webb is expected to compete in the multi-events for Clemson. He should help ease the loss of two-time All-American Ryan Koontz in that area. Webb, a native of Oklahoma City, OK, finished runner-up at the 2006 state 3A meet with a 6’6″ clearance in the high jump. Webb, who also played football for Heritage Hall High School, was also a state qualifier in the 110m hurdles and 300m hurdles. Webb is ranked among the top-five in the state of Oklahoma in both hurdles events as well as the high jump.