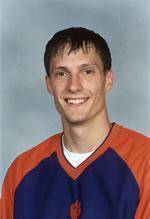 Selected members of the Clemson men’s track and field team will travel to three last chance meets this Saturday. The Tiger field event qualifiers will compete at the Virginia Tech Last Chance Invitational, the Tiger sprinters and hurdlers will compete at the Cyclone National Qualifier, and Clemson’s distance runners will travel to the Alex Wilson Invitational. This weekend is the last opportunity for NCAA Division I track and field athletes to record marks to provisionally or automatically qualify for inclusion in the NCAA Indoor Championships.

At the Cyclone National Qualifier in Ames, IA, Ronald Richards will look to better his provisional qualifying time in the 60m dash. Richards has a season-best and provisional qualifying time of 6.68 in the event, recorded at the ACC Championships. He is currently tied for 10th in the nation with that mark. Roy Cheney will also compete in Ames, representing the Tigers in the 60m hurdles. He owns a season-best time of 7.82, tying him for 17th nationally. Cheney’s time is a converted 55m hurdles time, set at the Clemson Classic last weekend. Clemson’s 4x400m relay team will also be in action at the Cyclone National Qualifier, as it looks to build on its season-best time of 3:10.66 set at the Notre Dame Invitational. Richards, Michael Bolling, Rashad Gardner and Cheney will comprise the Tigers’ 1600m relay team this weekend. Darius Acker will also travel with the team as an alternate for the relay.

Four Tigers will compete at the Virginia Tech Last Chance Meet in Blacksburg, VA. Mitch Greeley is in the hunt for his first NCAA qualifying mark, and has a season-best clearance of 16’8.75″ set at the Notre Dame Invitational. Adam Linkenauger set his provisional qualifying mark and season-best clearance of 7’2.25″ in the high jump at the Clemson Opener. He is tied for 10th on the national list with that mark. In the long jump, George Kitchens has a season-best leap of 24’11.25″ set in his victory at the ACC Championships. He is tied for 11th on the national qualifiers’ list. Jason Bell is tied for 12th nationally in the triple jump. He has a season-best mark of 52’0″ set at the Clemson Classic last weekend.

Itay Magidi and Derrick Wyatt will compete at the Alex Wilson Invitational in South Bend, IN. Both Tigers will compete in the 3000m run. Wyatt is a provisional qualifier in the event with a time of 8:06.23, while Magidi has a season-best time of 8:13.78 set at the ACC Championships.