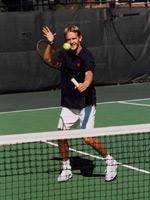 The Tigers enter this weekend’s matches with an 18-7 overall record, after dropping a 4-3 match to South Carolina Wednesday, Mar. 26. Clemson has posted a 2-0 mark in conference play this season with wins over NC State and Florida State. This season the Tigers have tallied an 11-0 record at home.

In singles, sophomore Sander Koning leads the team in wins with a 21-7 overall record. Freshman Jarmaine Jenkins has won nine of his last 11 matches and has posted a 20-5 overall record this season. Junior Damiisa Robinson has a 21-5 overall record and a 20-4 mark in dual matches.

In doubles, the Tigers’ duo of Nathan Thompson and Jenkins leads the team with an 18-6 overall record, most recently defeating South Carolina at number one doubles.

Clemson holds a 29-28 all-time advantage over Duke. The Tigers are 14-10 against the Blue Devils at the Hoke Sloan Tennis Center. Duke is 10-5 overall and 2-0 in conference action