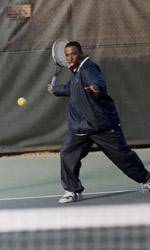 CLEMSON, SC — The Clemson men’s tennis team will play host to Virginia on Sunday afternoon at 2:00PM at the Hoke Sloan Tennis Center on the Clemson campus.

Clemson is 40-8 all-time against Virginia and have won five out of the last six meetings in the series. The teams split two matches last season. Virginia won 5-2 in Charlottesville on March 30, but Clemson rebounded to defeat the Cavaliers 4-3 in the semifinals of the ACC Tournament.

In singles, the Tigers are led by freshmen Sander Koning and Nathan Thompson. Koning is 18-6 overall (13-4 dual record) in singles this season while Thompson is 16-8 overall and 12-5 in dual matches. In doubles, Clemson’s duo of Damiisa Robinson and Goran Sterijovski have an impressive 11-2 mark in 13 dual matches this season.