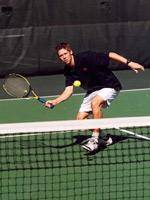 The Clemson men’s tennis team will play host to South Carolina Wednesday afternoon at 2:00 p.m. at the Hoke Sloan Tennis Center on the Clemson campus. The first 100 fans attending the match will receive a complimentary One Clemson…Solid Orange T-Shirt. Admission is free to the public.

Clemson will enter the match with a 16-10 record overall. Jarmaine Jenkins have both won 18 matches each to lead the team. South Carolina has a 12-7 record overall. The Gamecocks are coming off a 4-3 win over 21st ranked Tennessee at Knoxville on March 26, and a 4-0 loss to 12th-ranked Georgia at Athens, GA on March 28.

Once again, Clemson Athletics is encouraging all Tiger fans to show their spirit and wear orange for the One Clemson…Solid Orange event, as Head Coach Chuck Kriese’s men’s tennis team plays host to the University of South Carolina. Clemson teams are currently 10-2 in 2003-04 One ClemsonŠSolid Orange events.

During the 2003-2004 season, at selected events, an additional fee is applied to each game ticket sold for the designated One ClemsonŠSolid Orange event. The proceeds from the One Clemson event will be used for specific One Clemson academic efforts. The One Clemson concept recognizes the strength of unity in everything we do as a University. The One Clemson Fund supports the University’s academic goals that will further enhance the ability of Clemson University to make for a stronger South Carolina and nation.