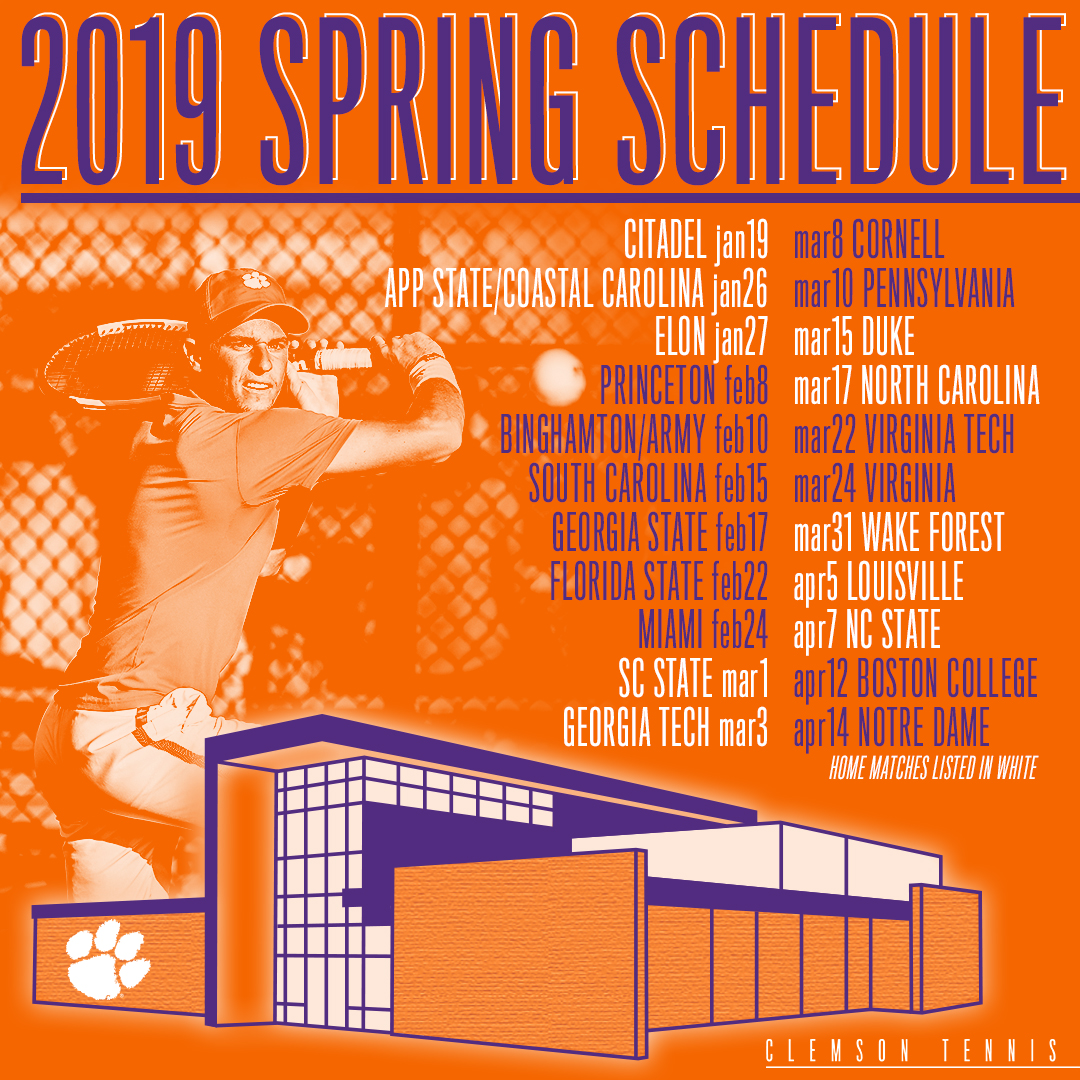 CLEMSON, S.C. –  Eleven teams that were in the field for the 2018 NCAA Tournament highlight the Clemson men’s tennis team’s slate of 2019 matches, released by head coach John Boetsch on Wednesday. The spring schedule features 10 home matches at the newly-renovated Hoke Sloan Tennis Center and 12 matches on the road or at neutral sites.

“I couldn’t be more excited about where we are as a program,” said Boetsch. “We are looking forward to the opportunities and challenges ahead this spring. The ACC, as always, will be one of the toughest conferences in the nation. We look forward to the opportunities and challenges each match will bring. We will hit the road hard in the middle of the season, but I have no doubt it is going to toughen us up and prime us for the meat of ACC play and tournament time. This is the hardest-working team of my tenure, and we are looking forward to battling this spring.”

The spring season begins with three straight home matches beginning on Jan. 19 against the Citadel, followed by a doubleheader against App State and Coastal Carolina on Jan. 26 and wrapping up with Elon on Jan. 27.

The Tigers then spend the entire month of February on the road, facing Princeton, Binghamton and Army in a doubleheader, South Carolina and Georgia State over a span of nine days between Feb. 8 and Feb. 17 before opening ACC play against Florida State on Feb. 22. The team heads further south to take on Miami on Feb. 24, rounding out the month.

The first weekend of March features home matches against SC State and Georgia Tech, and the next weekend will see Clemson travel north for contests at Cornell and Pennsylvania. Duke and North Carolina are next up on the home slate, visiting Hoke Sloan Tennis Center on March 15 and 17, respectively, and the Tigers finish March with a trip to Virginia to take on Virginia Tech on March 22 and Virginia on March 24.

The final three home matches of the year are during the first week of April, with Wake Forest, Louisville and NC State all making the trip to Clemson before the team wraps up the regular season at Boston College and Notre Dame on April 12 and 14, respectively.

The 2018 ACC Championships will be held April 17-21 at the Cary Tennis Park in Cary, N.C., and the season concludes with the NCAA Tournament. Following first and second round matches at school sites, the NCAA Team & Individual Championships are set to be held at the USTA National Campus in Orlando, Fla. from May 16-25.