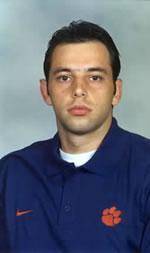 Men’s Tennis On the Road for Weekend Matches

Clemson, SC — The 24th-ranked Clemson Men’s Tennis team will travel to face Toledo and Ohio State on Saturday in Columbus, OH. The Tigers are 5-1 on the season after defeating Anderson College and Liberty last Friday night. Clemson’s only loss came at the hands of sixth-ranked UCLA on January 27.

Clemson is led at flight one singles by junior Nathan Thompson who is currently ranked 31st in singles play according to the latest Intercollegiate Tennis Association poll. Thompson teams up with sophomore Jarmaine Jenkins to form the No. 17 doubles pair in the ITA poll. Goran Sterijovski is Clemson’s hottest player sporting a 5-1 individual record, having won his last three matches.

Toledo currently owns a 3-2 record on the season after a tough 4-3 victory over DePaul last Saturday. The Rockets are led by Mid-American Conference Tennis Player-of-the-Week Khalid Al Nabhani who went undefeated at number one singles and number one doubles in victories over Youngstown State and Dayton. This will mark the seventh meeting between the two team. Clemson leads the series 6-0 including the most recent match, a Tiger victory in 1976 in Clemson.

Ohio State is 4-1 on the season and is ranked 15th according to the ITA poll. The Buckeyes lost their season opener to No. 21 Georgia, but since then have recorded four straight shutouts including Toledo last weekend. Ohio State is led by senior Jeremy Wurtzman who is the top-ranked singles player in the nation. Freshman Joey Atlas holds a perfect 5-0 record in both singles and doubles action this season. Wurtzman and Atlas are ranked as the No. 21 doubles team in the ITA poll.

Clemson is coached by Chuck Kriese in his 29th season. Kriese holds a 570-357 record, and is ranked as the sixth winningest active coach in NCAA Division I. The two-time National Coach-of-the-Year has led the Tigers to 20 NCAA Tournament appearances.