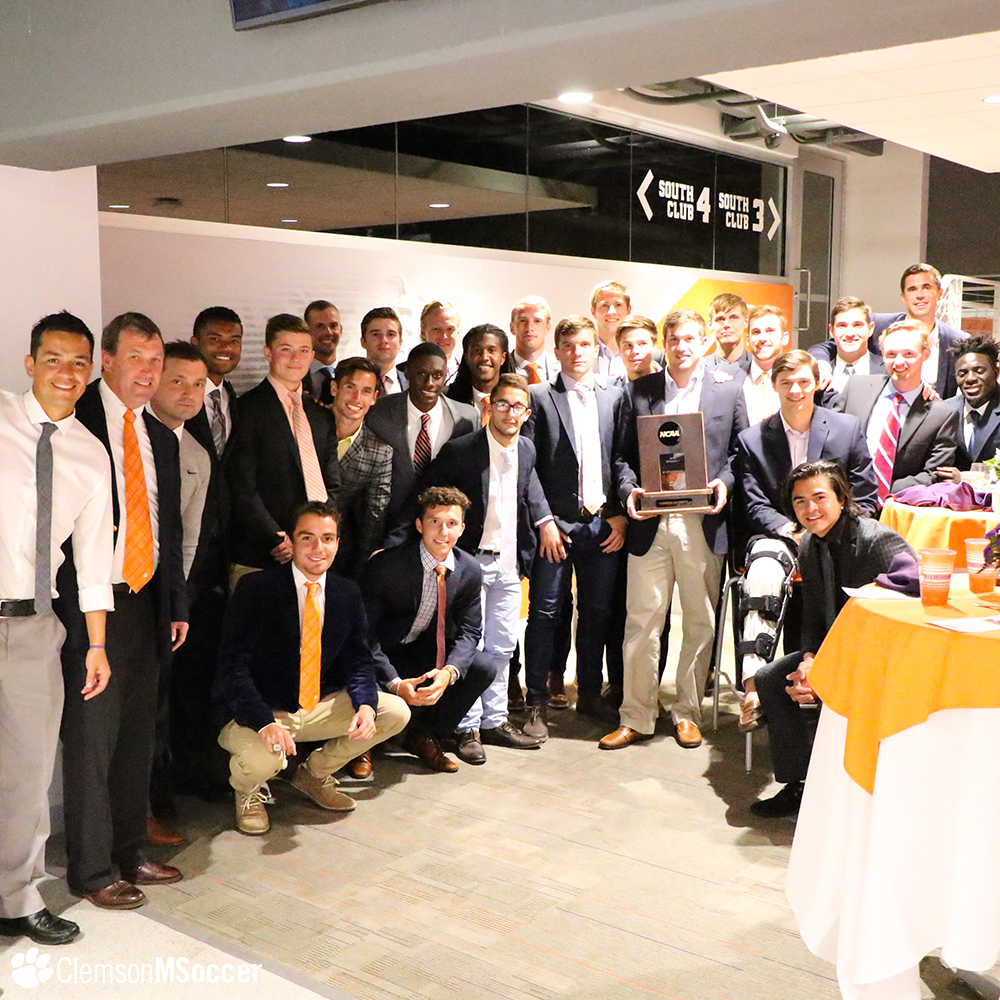 CLEMSON, S.C. – The Clemson men’s soccer program held its annual awards banquet on Saturday, April 1 at the South Club of Memorial Stadium. It was a festive atmosphere, as the Tigers had plenty to celebrate, including a run to the ACC Championship game and a second straight Elite Eight appearance, as well as many individual athletic and academic accomplishments.

Junior midfielder Oliver Shannon was named the Dalton Family Most Valuable Player. Shannon, also an All-ACC selection, started all 23 games in 2016. Shannon led the team in assist and back to back Elite Eight appearances.

Sophomore defender Patrick Bunk-Andersen was the Defensive Player of the Year and junior forward Diego Campos was the Offensive Player of the Year for 2015. Bunk-Andersen played in all 23 games and was named to the All-ACC Third Team. Campos scored a team-best six goals in 2016, including three game winners. Campos was also named to the All-ACC Second Team.

Freshman defender Malick Mbaye earned the Newcomer of the Year award was named to named to TopDrawerSoccer’s Freshman Best XI First Team and named to the ACC All-Freshman Team. Redshirt freshman forward Trey Langlois received the Scout Team Player of the Year award, awarded to a player who showed unwavering commitment to preparing the team for upcoming matches throughout the year.

Chris Heijjer and Mauriq Hill were other recipients of awards for 2016. Heijjer was presented this year’s service award. While Hill earned the Ratchford Coache’s Award.

Gary Connor was the recipient of the second ever I.M. Ibrahim Award. The award was presented by Ibrahim’s widow, Julie and previous award winner Pearse Tormey. The I.M. Ibrahim Award is presented to an alumnus who has made a significant contribution to the program reflecting the passion and values Coach Ibrahim embodied during his Clemson career.

Keith Tormey Solid Orange AwardChristopher Heijjer – Junior MidfielderAn individual on the team who pursued excellence on and off the field by representing the men’s soccer program in a positive manner.

Newcomer of the Year AwardMalick Mbaye

Scout Team Player of the YearTrey LangloisA player that was committed to preparing the team for upcoming matches on a daily basis, pushed the starting eleven in training and was always ready when called upon.

Ratchford Coach’s Achievement AwardMauriq HillA player whom the coaches feel went above and beyond what was asked in order to unite the team throughout the season.

Offensive Player of the YearDiego Campos

I.M. Ibrahim AwardGary ConnerThis award shall be given annually to an alumnus who has made a significant contribution to Clemson Men’s Soccer that reflects the passion and values that Coach Ibrahim left during his career as a coach, educator, entrepreneur and champion. The award recipient will be an ambassador for the year for Clemson and the men’s soccer program in memory of Coach Ibrahim.

NCAA No. 1 RPI AwardOliver Shannon, Austen Burnikel and Iman Mafi accepted the award on behalf of the team.This award is granted to the team that finishes the season with the No. 1 RPI in the country (the toughest schedule throughout the year).