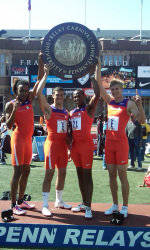 PHILADELPHIA – Clemson’s men won the shuttle hurdle relay championship of America on Friday to highlight the second day of action for the Tiger track & field teams at the 116th annual Penn Relays at Franklin Field. The victory was the fourth in the history of the event for the Clemson men, and the seventh overall relay championship in the history of the prestigious meet for the Tiger track & field program.

Clemson previously took home the men’s shuttle hurdle relay championship in 1992, 1997 and 1998. The victory Friday was the first for either Clemson team – men or women – since the men’s 4x100m and sprint medley groups took home gold medals in 1999. The Tigers’ lineup Friday consisted of Claudio Delli Carpini, Marcus Maxey and Miller Moss. Clemson gained the victory with a time of 56.45, despite being without the services of All-ACC hurdler Spencer Adams. The Tigers held off Nebraska (56.53), who came up short in trying to run down Moss in the anchor leg.

Rolle had a good afternoon for the men’s program. The native of Winston-Salem, NC and one-time University of Tennessee standout was eighth in the preliminary round of the 110 high hurdles with a time of 14.06. He qualified for Saturday’s championship final, which will be held at 3:30 PM. Michaylin Golladay was 19th overall in the women’s high hurdle heats with a time of 13.91.

The women’s shuttle hurdle relay placed sixth out of 19 competing squads on Friday. The Tigers’ group crossed the finish line with a time of 57.60. The women’s 4x100m relay competed in the consolation final on Friday and placed third with a time of 45.19. The team consisted of Golladay, Stormy Kendrick, Kristine Scott and Jasmine Edgerson. The 4x200m relay team was sixth Friday with a time of 1:34.35, and the Tigers will compete in Saturday’s championship final at 2:35 PM.

The men’s sprint medley relay was 10th out of 40 schools on Friday. The lineup – which posted a time of 3:24.53 – consisted of Jordan Rispress, Miller Moss and Jasen Turnbull.

A pair of men’s field event athletes competed Friday afternoon. Josh Fowler took fourth in the open long jump with a personal best outdoor leap of 24’7″. Chris Spear, fresh off a fourth-place showing at the ACC Championships, tied for fifth in the open pole vault with a clearance of 15’9″.

Clemson’s action at the 2010 Penn Relays concludes on Saturday.