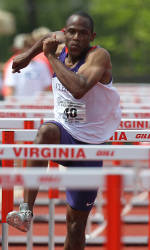 PHILADELPHIA, PA – For the second time in the last three years, Clemson claimed the men’s shuttle hurdle relay championship at Franklin Field in the 118th running of the Penn Relays on Friday. The team of Spencer Adams, Charlton Rolle, Marcus Maxey and Elijah Brittonbreezed past the competition to claim a famous Penn Relays wheel trophy. The win highlighted an afternoon of relays for the Tiger track & field program.

The men’s shuttle hurdle team ran to a time of 54.98 ¬ just eight hundredths off the school record of 54.90 set in 1998. It was Clemson’s fifth overall victory in the event, tied for second-most in Penn Relays history with Penn, Pittsburgh, Winston-Salem and Yale. Maxey and Rolle were also part of the 2010 team that won a famous Penn Relays wheel.

The women’s shuttle hurdle relay entered Friday’s championship as the favorite, but the Tigers suffered a DNF after a disappointing effort. The women’s 4×200-meter relay won the fourth of six qualifying heats and advanced to Saturday’s championship final, which will be held at 2:25 PM. The team of Bridgette Owens, Marlena Wesh, Dezerea Bryant and Jasmine Edgersoncombined to a time of 1:35.20 and held off Pittsburgh at the line by a matter of hundredths of a second.

The women’s sprint medley relay also competed Friday afternoon and finished 11th out of 41 teams. The group, consisting of Owens, Bryant, Wesh and Alyssa Kulik posted a time of 3:57.19.

The women’s 4×200-meter relay was the only action Saturday for the Tigers.  The team of Wesh, Bryant, Owens and Edgerson combined to a time of 1:33.92 and finished third for the second straight season.  LSU won the event by holding off Texas A&M at the finish line.