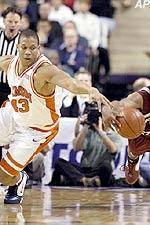 Men’s Hoops Falls In First Round Of ACC Tournament

GREENSBORO, N.C. – Tim Pickett scored 22 points and Nate Johnson picked a good time to end his shooting slump as Florida State beat Clemson 72-61 in the first round of the ACC tournament Thursday night.

The ninth-seeded Seminoles (14-14) advanced to the quarterfinals to play No. 1 seed Wake Forest. The ninth-ranked Demon Deacons had to hold on against Florida State two weeks ago, winning 60-56.

Pickett was 10-for-18 from the field with 12 rebounds and three assists as Leonard Hamilton won his Atlantic Coast Conference tourney coaching debut.

Johnson, a junior college transfer playing in his first ACC postseason, was 3-for-25 from the field in Florida State’s past five regular season games. But he went 5-for-6 in this one, making four 3-pointers for a season-high 18 points.

Clemson did pull to 55-51 with 8:20 left. Adam Waleskowski made a follow shot and Pickett added a slam dunk and 15-footer to halt the rally and push the lead back to double digits.

Ed Scott, a first-team all-ACC pick, had a miserable game, going 3-for-18 for 11 points. Meanwhile, fellow guard Chey Christie was 2-for-10 as the Tigers fell to 2-12 this season when scoring less than 70 points.

Johnson sank a pair of 3-pointers 48 seconds apart to key Florida State’s 20-1 run to start the second half, erasing an eight-point Clemson lead in less than three minutes.

Clemson missed 10 of its opening 14 shots before getting hot over the final stages of the first half.

Olu Babalola, Scott and reserve Shawan Robinson keyed a 19-6 spurt over the final 5:53. Robinson began the run and closed it with 3-pointers, while Babalola added seven points in a span of 1:19 and Scott had four for a 36-28 lead at the break.

Florida State had been 0-4 at the Greensboro Coliseum in ACC tournament games before beating the Tigers, who have never won the league title in 50 seasons.

Johnson’s previous best was 14 points against Maryland on Feb. 12.