Clemson, S.C.—For a record 37th time, Larry Penley’s Clemson golf team has been selected for the NCAA Tournament. The ACC Champion Tigers will participate in the Kingston, Tennessee Regional as the number-one seed May 17-19 at the par 71 Country Club of Tennessee.

Penley, who is retiring at the end of this season, has guided the Clemson program to the NCAA tournament every year he has been the head coach. This is his 38th year at the helm. The only year Clemson did not play in the NCAA Tournament was last year when the event was cancelled due to the COVID19 pandemic.

Clemson has a 9-0 record this year against the other teams in the Kingston Regional. This will be Clemson’s second appearance in an NCAA Regional at this course. In 2005, Clemson finished 11th out of 27 teams and missed qualifying for the national tournament by two shots.

“I am excited to be in the tournament again and excited to go to the Kingston Regional,” said Head Coach Larry Penley. “This is a Tom Fazio course and we are very familiar with Fazio courses. We play a lot of golf on Fazio courses in our area. We will need to do a good job with our sight lines on our drives.

“I am familiar with the course because we played the 2005 NCAA regional there and we played some other tournaments there when we played the ACC vs. SEC Challenge Matches.

“No matter where we were sent it was going to be a good field and we are going to have to play well to advance to the national tournament.”

Penley has won seven NCAA Regional Championships, more than any other coach and has taken Clemson to the national tournament 29 times, including 21 consecutive years from 1984-2004. Clemson has reached the regional of the NCAA Tournament every year since the format began in 1989.

Clemson team is ranked in the top four in the nation by each of the three services that rank college golf teams. The Tigers are third according to Golfweek and Golfstat, and fourth by the College Golf Coaches Association ranking. The Tigers have won four tournaments this year, including four of the last five. Clemson is coming off a championship performance at the ACC Tournament in Atlanta, Ga.

Clemson is led by junior Jacob Bridgeman, who leads the nation in stroke average at 69.24. The native of Inman, SC has six top 10 finishes in seven events this year, including two medalist honors. He is coming off a fifth-place at the ACC Tournament, plus two match-play victories. He has a team best 13 rounds in the 60s among his 16 under-par rounds.

Bridgeman is ranked third in the nation in the latest Golfweek ratings and seventh by Golfstat and is one of 10 candidates for the Haskins Award. He is joined in the top 20 by teammate Turk Pettit, who is 11th by Golfstat and 17th by Golfweek. Pettit has finished in the top 10 in five of his six tournaments, including a 10th place at the recent ACC Tournament. He has nine under-par rounds, including six in the 60s. He has shot under-par in 48 of his 91 career rounds so far.

Patton is Clemson’s third best player in terms of stroke average (71.19) and is ranked 75th by Golfstat and 91st by Golfweek. He finished 14th at the ACC Tournament in stroke play, then defeated Carter Graf of NC State in 20 holes to clinch the semifinal match play victory at the ACC Tournament. Patton has a 72.6 career stroke average, just above the 72.7 recorded by his father, Chris Patton, who he was an All-American at Clemson between 1986-90.

While Kyle Cottam is fourth on the Clemson team in stroke average, he was the Tigers best player at the ACC Tournament. The senior finished fourth in the stroke play portion of the event with a 205 total, then had a 2-0 record, the only Tiger with a perfect record, in match play wins over NC State and Florida State.

Zack Gordon rounds out the Clemson lineup with a 72.44 stroke average. He had improving scores of 76-74-71 at the ACC Tournament then clinched the overall championship when he defeated Greyson Porter of Florida State in 21 holes in match play.

We are headed to Kingston Springs for the NCAA Regionals! pic.twitter.com/kB8myCEioj 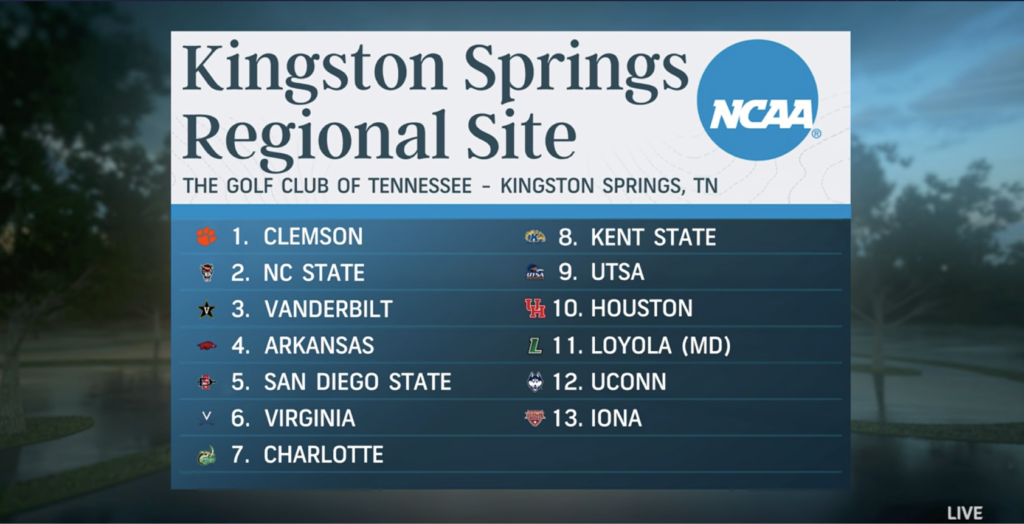