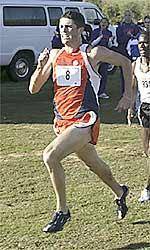 CLEMSON, S.C. – The Clemson men’s cross country team will compete at the 2003 NCAA Southeast Regional Cross Country Championships at Overton’s Lake Kristi on Saturday. The men’s 10K race will begin at approximately 10:00 AM, with the top two teams automatically advancing to the NCAA Championships to be held on the campus of Northern Iowa University on Nov. 24. Individually, the top four runners in each race that are not members of the championship team will advance to the national finals.

Last year, then-senior Jason Meany and current senior Scott Shaw qualified for the NCAA Championships and Clemson placed fifth in the team race. Meany won the individual region title, while Shaw earned his second all-region honor with a third-place finish. As a sophomore, Shaw finished 20th to earn the All-Southeast Region accolade. Derrick Wyatt finished 23rd a year ago, while Ryan Fenton and Clay Pendleton were 62nd and 63rd, respectively.