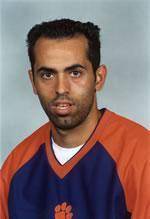 The Clemson men’s cross country team will travel to Louisville, KY for the NCAA Southeast Regional Championships this Saturday. The Tigers will take part in the 10K race, which will be held at E.P. “Tom” Sawyer Park at 12:15 PM. The top two teams will advance to the NCAA Championships on November 20 in Terre Haute, IN.

The Tigers competed at this venue earlier in the season in the Greater Louisville Classic. At that meet, Clemson was fifth, but competed without senior Itay Magidi. The native of Yavne, Israel showed what the Tigers were missing two weeks ago when he claimed the individual title at the ACC Championships. He became the first Tiger since Kevin Hogan in 1994 to claim the conference crown. Magidi did so with a personal best 8K time of 23:52.5. Magidi was an All-Region selection in 2004 and hopes to garner the same honors this time around.

Clemson has had a rich history at the NCAA Regionals throughout the years. Each of the last five seasons, the Tigers have had at least one All-Region honoree. Last year, Matt Clark finished sixth to earn the bid to the NCAA Championships. Clemson will compete at this year’s event without Clark, who has been out all season due to injury.

The Tigers do have the services of Bryce Iverson, a sophomore who earned All-ACC honors in Earlysville, VA two weeks ago. Iverson was eighth at the conference meet and finished 13th at the Greater Louisville Classic to lead the Tigers’ effort earlier this season. Perhaps his best performance this year was a 21st-place showing and personal best time at the Pre-Nationals on October 14.

Sam Bryfczynski has been consistent in the #3 position for Clemson this season. He won the season-opening Clemson Invitational and was subsequently named ACC Performer of the Week for his efforts. Bryfczynski finished 23rd overall at the Greater Louisville Classic on September 30 in his previous visit to Saturday’s venue.

Brian Soder has improved his times and results each event this season, culminating with a 34th-place effort at the ACC Championships on October 28. His best 8K time of the season came at the Greater Louisville Classic, where he finished 42nd individually. His brother, Eric, has scored in two of the last three events for Clemson. He was 65th in Louisville earlier this year.

The final member of the travel squad for Bob Pollock’s team this weekend will be junior Sean Reilly, who contributed to Clemson’s team score at ACCs with a 50th-place showing. Reilly’s best time this season was also at Louisville on September 30.