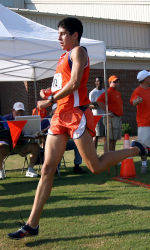 The Clemson men’s cross country team travels to Tallahassee, FL to compete in the ACC Championships on Monday. The 8K event will take place at Miccosukee Greenway. Last season, the Tigers finished fourth overall. This year, the Tigers won the Clemson Invitational before finishing eighth in the Great American Classic and 22nd at the Pre-Nationals event.

Matt Clark has been steady for Clemson this fall, with finishes of first and second place in the team’s first two events, the Clemson Invitational and Great American Classic. He finished 33rd in the Pre-NCAA Meet two weekends ago at Terre Haute, IN. The 2004 all-region honoree was named ACC Performer of the Week this season on September 26.

Clay Pendleton, Greg Isaacs, and Sean Reilly will also participate on Monday. Red-shirt freshman Jay Lumpkins and first-year freshmen Sam Brfyczynski and Bryce Iverson will also make the trip with the team. Bryfczynski has competed in all three events this season for Clemson.