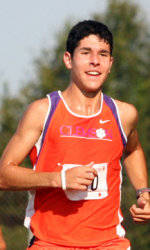 Clemson, SC – The men’s cross country schedule was announced Thursday by Head Coach Bob Pollock. The Tigers will take part in six meets, with a possible seventh being the NCAA Championships in November. Clemson will not host a cross country meet for the first time since 2000, as construction for the Tiger golf practice area will be underway in the fall.

“Our schedule this season is ideal,” Pollock said. “We will have great competition along the way. Our team has great talent up top. Our success this year will be a matter of some of the veterans stepping up and the youth stepping in and performing well.”

Clemson’s season will begin with a pair of meets in Cullowhee, NC at Western Carolina University. The WCU Invitational is scheduled for August 31, while the Catamount Classic will follow two weeks later. The Tigers’ first major test should come at the Notre Dame Invitational in South Bend, IN. Clemson will take part in that competition on September 28.

The Pre-NCAA meet will again be held in Terre Haute, IN and will take place October 13. Two weeks later, the Tigers will return to Charlottesville, VA for the second straight year for the ACC Championships. Clemson was fifth in that event in 2006 and boasted the league’s individual champion in former distance great Itay Magidi. The year will wrap up with the Southeast Regionals in Louisville, KY on November 10. Should the team or any individuals advance to the NCAAs, the meet will be held November 19 in Terre Haute.

Despite the loss of Magidi, the cross country squad will return some top-notch performers. Matt Clark participated in the NCAA Cross Country Championships and was All-ACC and All-Region in 2005. He red-shirted during the fall of 2006 due to injury. Clark is fresh off a red-shirt junior season on the track in which he earned four All-ACC honors, including a championship in the 10,000m in April.

Bryce Iverson also returns with All-ACC and All-Region experience. The rising junior from Manassas, VA was eighth a year ago at the ACC Championships and also an impressive 21st at the Pre-NCAA meet in 2006.

Brian Soder returns as a three-year letterwinner in cross country. The native of Erie, PA was a scorer in four meets for Clemson a year ago. Sam Bryfczynski returns for his third season on the cross country circuit. He won the individual title in 2006 at the Clemson Invitational and was named ACC Performer-of-the-Week for his efforts. Will Noble also returns with experience, having competed last season for the Tigers. The red-shirt sophomore was third at the Clemson Invitational in 2006.

Dan Cartica will make his debut with Pollock’s cross country squad in the fall. The New York native red-shirted as a freshman, but was All-State in cross country as a high school senior.

Five first-year freshmen have also been added to the roster for the upcoming season. Matthew Bruce from Ontario, Canada highlights the group. He was a participant at the 2007 IAAF World Cross Country Championships for the Canadian junior team. He also has secured a spot in the 5000m for Canada in the Pan American Junior Championships, which will be held July 6-8 in Brazil.