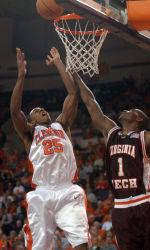 The Clemson men’s basketball team will holds its annual Orange & White scrimmage on Saturday in conjunction with the day’s Homecoming events. The game will get underway at 3:30 PM and will take place in Littlejohn Coliseum. The scrimmage will be open to the public, with free admission. At 5:45 PM, players will be available to sign autographs at the Tiger Tailgate Show on the lawn at Littlejohn.

Season tickets for the Tigers’ 16-game home schedule are available at the Clemson athletic ticket office. To order, call 1-800-CLEMSON or online at www.clemsontigers.com.

The Tigers return nine lettermen and four starters from last year’s team that went 19-13 overall and advanced to the NIT for the second straight season. Headlining the returnees is the backcourt of Vernon Hamilton and Cliff Hammonds, who have combined for 122 career starts. Hamilton was an All-ACC Defensive selection a year ago and is the Tigers’ single-season and career steals leader. He led the conference in steals per game in 2005-06, a first in Tiger basketball history. Hammonds has averaged double figures in both of his first two seasons, something not achieved at Clemson since Terrell McIntyre (1995-99) led the Tiger backcourt.

Sam Perry started 20 games a year ago at small forward, while K.C. Rivers had 12 starts in his first year as a Tiger. Also returning for the team this season is James Mays, who started the first 11 games in the 2005-06 season. Other returning lettermen on this year’s squad are Matt Morris, Julius Powell, Raymond Sykes, and Jesse Yanutola. Joining the team this season will be four freshmen: Trevor Booker (Whitmire, SC), Karolis Petrukonis (Trakai, Lithuania), David Potter (Severn, MD), and A.J. Tyler (Palm Harbor, FL).

Clemson will hold an exhibition game versus Lithuania Academy on Tuesday, October 31. That game will tip off at 7:30 PM from Littlejohn Coliseum. The regular season will begin November 10-12 at the Cox Communications Classic in Norfolk, VA. Clemson’s regular season home opener will be against Furman on November 15.