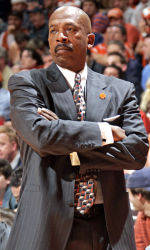 Clemson will attempt to end a four-game losing streak to SouthCarolina when the two teams meet on Saturday. Clemson’s last wintook place during the 1999-00 season, a 61-58 triumph at Clemsonthat was Clemson’s sixth consecutive victory in the series. SouthCarolina has a 86-68 lead in the series, but Clemson has won 26 ofthe last 39 dating to the 1977-78 season. Olu Babalola played oneof his best all-around games as a Tiger when he scored 17 points,had eight rebounds and made 7-9 free throws in Clemson’s 80- 73 winover Ohio State. Shawan Robinson leads the ACC in three-pointshooting percentage (.714) and is third in three-point goals pergame (3.75). Robinson is shooting 59.5 percent from the field, 71.4percent from the threepoint line and 71.4 percent from the foulline. Robinson, South Carolina guard Tre’ Kelley and forwardBrandon Wallace all played together on a United States team in atournament in Dominican Republic this past August. Sharrod Ford iscoming off a 20-point, 10-rebound and five-blocked shot gameagainst Ohio State. It was the second time in his career he had atleast 20 points, 10 rebounds and five blocks in the same game.Clemson is in the middle of a three-game stretch in which it playsa Big East, a Big Ten and an SEC team in consecutive games. This isthe first time Clemson has played three consecutive games fromthose conferences since the 1997-98 season. Sharrod Ford had his14th career double-double against Ohio State, his second in a row.He is third among active ACC players in career doubledoubles,trailing only Sheldon Williams of Duke and Sean May of NorthCarolina. Clemson’s four freshmen have scored 108 of Clemson’s 326points (33.1 percent), grabbed 52 of the 147 rebounds (35.4percent) and made 26 of the 66 steals (39.4 percent), while playing303 of the 800 available minutes (37.8 percent). Oliver Purnell is1-1 against South Carolina in his coaching career. He defeated theGamecocks in Columbia when he was the head coach at Old Dominion,and suffered the loss last year as the Clemson head coach. DaveOdom has defeated Clemson nine consecutive games, three as the headcoach at South Carolina and his last six games against the Tigersas the head coach at Wake Forest. One of the areas of improvementfor Clemson this year is turnover margin. Clemson is second in theACC in that area this year after finishing 2003-04 ranked ninth inthe league.