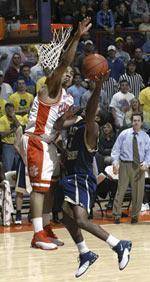 For the second consecutive game the Tigers used a pressing defense to make a long scoring run during the first half. The Tigers used an 18-0 run over a 3:50 time period to move from an 18-11 lead to a 36-11 margin. A three-point play by Hamilton at the 7:06 mark gave the Tigers the 36-11 lead, and the 25-point margin would be the largest of the game for the Tigers. At that point in the game, Clemson had a 22-0 lead in points off turnovers.

Clemson concluded the game with 17 steals, including six by Hamilton, just one off the Clemson single game individual record. Clemson won the points off turnovers stat for the game, 34-10. The Tigers shot 31-62 from the field for 50 percent and made (11-8) more free throws than UNC-Asheville attempted.

Robinson, who made 7-10 shots from the field, hit a three-point shot on Clemson’s first possession of the second half to give the Tigers a 50-26 lead. UNC-Asheville played hard throughout the second half and cut the lead to 70-57 with 3:50 left on a three-point goal from Chad Mohn. But that was as close as UNCA could get. Ford, who had scored just four points in the season opener against Hampton due to foul trouble, had 16 points and six rebounds against UNCA. He had 13 points at intermission to lead all scorers. He and Akingbala combined for 15 rebounds, contributing significantly to Clemson’s 41-35 rebound advantage.

Tigers vs. Boston College on NESN The Clemson vs. Boston College game in Boston on November 26 was a late addition to the TV schedule and will be broadcast by New England Sports Network, an affiliate of the Fox Sports Network. The game can be seen in South Carolina for viewers who have DIRECTV and subscribe to the Fox SportsNet package. The announcers will be Eric Frede (play-by-play), Ron Perry (Color and former Holy Cross All-American) and Jayme Parker (sideline). The tipoff is set for 7:30 PM.

This is the first of three consecutive and at least 18 total games on live television for the Tiger basketball team this year. The Ohio State game on December 1 will be shown on ESPN2 and the South Carolina game of December 4 will be televised by Fox SportsNet South. The East Carolina game on December 29 will be shown on the same Fox SportsNet South. Thirteen of Clemson’s 16 conference games, plus ACC Tournament will also be televised this year.

Robinson Off to Strong Start Shawan Robinson has been Clemson’s top scorer in each game so far this year. The junior guard scored a career high 26 points in the victory over Hampton when he made 10-14 shots from the field, then scored 18 in the win over UNC Asheville on 7-10 shooting.

For the first two games combined, Robinson has averaged 22 points per game, shot 17-24 from the field overall, and made 9-12 threepoint shots. He also has eight total rebounds, a team best 11 assists and just three turnovers. Robinson has 44 points in 53 minutes.

This is the second best scoring performance in back-to-back games in Robinson’s career. He had 21 points at Georgia Tech, followed by 24 points in the win over #12 North Carolina at Littlejohn Coliseum last year for 45 total points. But, he shot 14-30 in those two games. This current 17-24 start on field goals and 9-12 on three-point shots is the best back-to-back shooting performance of his career.

Mays Top Scorer Among Freshmen James Mays was suppose to help Clemson predominantly as a defensive player. He has long arms and great quickness to help Clemson in its pressing defense. But, the freshman from Garner, NC is tied for second on the club in scoring after two games with 20 total points on 9-12 field goal shooting. Mays had 11 points in the season opener against Hampton, then had nine in the win over UNCA. He has 20 points and seven rebounds in just 38 total minutes, so he has been very productive in both contests. He leads the four freshmen in scoring and field goal percentage.

Mays was a top 100 player out of high school by Prepstars and Rivals.com and is from the same area of North Carolina as Shawan Robinson and Florida State forward Anthony Richardson. Other former college players from his high school (Garner) are David West, an All-American at Xavier from 1999-2003, and Donald Williams, the MVP of the Final Four at North Carolina in 1993.

Clemson Men of Steal The biggest difference between Clemson’s team last year and this year is its full court pressure defense. Clemson did not have the speed and athleticism to full court press last year and the Tigers finished the season averaging just 6.82 steals per game, eighth in the ACC. The ACC has not published stats yet this year, but Clemson must be among the national leaders in steals with 42 through two games. That is an average of 21 per game, more than the single game record of 20 entering this season. But, this year, Oliver Purnell team has used a full court press for roughly half of each game. The 42 steals in consecutive games are the most in Clemson history in back-to-back contests at any stage of the season, never mind the first two games.

Entering this season, Clemson had recorded 17 steals or more in a game just 14 times in its history. Now Clemson has had at least 17 steals in each of the first two games of this season. The steals have led directly to easy scores and an incredible 78-21 advantage in terms of points off turnovers. Leading the way has been Vernon Hamilton with 11 steals in the first two games. He led the Tigers in that category last year when he had 50, the second most in Clemson history for a Tiger freshman. Hamilton is one of six Clemson players with more steals than fouls, a rare occurrence over the course of a season.

Only two players in the last 17 years have had more steals than fouls over the course of a season. Hamilton has 11 steals against just three fouls. Clemson as a team has 42 steals and just 34 fouls. Clemson’s freshman class has made a strong contribution to this statistical advantage. The Tiger frosh have combined for 15 steals and committed just 16 fouls. Clemson had 25 steals in the first game of the year, the most in Clemson history by five and the second highest figure in ACC history. The Tigers then had 15 in the first half of the second game against UNC-Asheville, meaning Clemson had 40 steals in the first 60 minutes of the season.

The full court pressure defense has led to the two longest scoring runs of Oliver Purnell short Clemson career. The Tigers had a 20-0 run in the first half against Hampton and an 18-0 run against UNCA. Clemson concluded the 20-0 run to make the score 33-11 with 10:21 left in the first half against Hampton, then had an 18-0 run against UNCA gave the Tigers a 36-11 lead with 7:06 left.