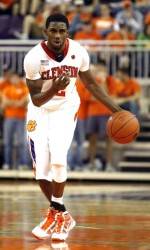 Watch Clemson vs. Presbyterian on TigerCast!

QUICK FACTS  Clemson and Presbyterian College will meet in the season opener for the first time since the 1954-55 season. The Tigers hold a 54-18-1 lead in the series that dates to 1915-16, the fifth year of Clemson basketball.

 Clemson won its exhibition game on Friday, Nov. 6, by a score of 99-51 over Francis Marion. Freshman guard Noel Johnson led three players in double figures. He scored 19 points on 7-10 shooting (3-6 from three-point range).

 Tanner Smith added 16 points in the exhibition win, while David Potter posted 10 and three steals. Fourteen players participated for Clemson, but no player logged more than 22 minutes in the game.

 Clemson is ranked No. 24 in the preseason Associated Press and ESPN/USA Today coaches’ polls. It marks the first time since 1997 the Tiger program has been ranked in either of the national preseason polls. The Tigers were ranked among the final top-25 teams by the AP each of the last two seasons.

 Over the last three years alone, Clemson has totaled 72 wins, third-best in the ACC behind only Duke and North Carolina.

 The Tigers were picked to finish third in the ACC by the league media, the highest predicted finish for Clemson since 1997-98.

 Clemson has three announced sellouts so far for the 2009-10 season, all conference games. Tilts against Boston College (Jan. 9), North Carolina (Jan. 13) and Duke (Jan. 23) are officially sold out.

 Trevor Booker was named to the preseason All-ACC team at the conference media day. The senior forward has also been tabbed a preseason All-American by Basketball Times, CBSsports.com, FoxSports.com, and Blue Ribbon. Booker is one of 50 players on the preseason watch list for the Naismith Trophy and Wooden Award as well.

 The Bookers will be the first brother combination to play for Clemson since Horace and Harvey Grant in 1984-85. Trevor’s younger brother, Devin, will make his debut in a Tiger uniform Friday evening.

 Demontez Stitt returns for his third season as the Tigers’ starting point guard. He has started 52 of 64 career games in his two years with the program. Last season, he ranked sixth in the ACC in assists per game and a/to ratio.