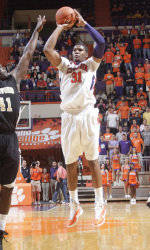 CLEMSON, SC – Clemson (4-1) will play host to South Carolina State (2-2) in men’s basketball action on Friday at 7:00 PM in Littlejohn Coliseum. The game will be streamed live on ClemsonTigers.com via TigerCast, and can also be heard throughout the Clemson radio network.

The Tigers are coming off a 2-1 record and third-place finish at the Paradise Jam. Clemson defeated Long Beach State 69-55 in the opening round before falling to eventual champion Old Dominion 61-60 in the second round. The Tigers rebounded in the consolation final with a 64-58 overtime victory over Seton Hall.

Demontez Stitt was named to the All-Tournament Team at the Paradise Jam after averaging 16.3 points per game over the three contests. He leads Clemson in scoring through five games at 13.6 points per game. Stitt posted a career-best 24 points in the loss to Old Dominion and 15 in the Tigers’ most recent game against Seton Hall.

Devin Booker is a second player averaging double figures for Clemson. The sophomore forward from Whitmire, SC is averaging 11.0 points and 5.0 rebounds per game. He is coming off a 14-point, eight-rebound performance in the Seton Hall win. He made a free throw with 3.2 seconds left in regulation to extend the game to overtime, where Clemson sank 13-of-14 from the charity stripe.

Clemson enters Friday’s contest shooting 46 percent as a team, including 37 percent from three-point range. The Tigers have the exact same amount of rebounds (160) as their opponents. Clemson’s leading rebounder through five games is actually 6-foot-5 junior guard Tanner Smith, who averages 5.4 caroms per contest.

SC State has posted victories over Anderson University and Carver Bible College. The Bulldogs fell by a score of 90-81 to Charlotte on Nov. 13. In their most recent action, the Bulldogs lost a 59-55 decision at home to Furman University. The Bulldogs have four players that average double figures in scoring, led by Darnell Porter at 13.5 points per game. Last season, SC State played a close game with Clemson, but the Tigers held on for the 70-67 win at Littlejohn Coliseum.

Clemson holds a 9-1 all-time advantage in the series, including an 8-1 advantage in games played at home. SC State won the 1999-2000 matchup with the Tigers in Orangeburg by a score of 71-68.