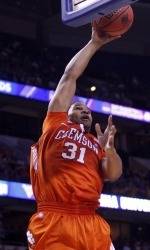 CLEMSON, SC – The Clemson men’s basketball team will play host to Queens University on Saturday in its lone public exhibition, prior to the start of the regular season next Friday. The Tigers and Royals will tip off at 7:00 PM from Littlejohn Coliseum. The event will be free of charge, and seating will be general admission.

The Tigers are coming off four consecutive berths in the NCAA Tournament, a first in school history. Last year, Clemson compiled a 22-12 overall record in Brad Brownell’s first season as head coach. He established Clemson’s first-year records for total wins and ACC regular season wins (9), and also guided the Tigers to wins in both the ACC Tournament and NCAA Tournament in the same season for the first time in 21 years.

Saturday’s contest will be Queens’ second exhibition of the season. Last weekend, the Royals fell to the College of Charleston by a score of 89-65. Junior forward Antonio Stabler had 20 points in the loss, while leading returning scorer Daniel Bailey chipped in 12. The Royals were 21-8 last season at the Division II level.

The regular season tips off Friday, Nov. 11 at 8:00 PM when Clemson plays host to Gardner-Webb. Call 1-800-CLEMSON or visit the ticket link on the ClemsonTigers.com home page for ticket information.