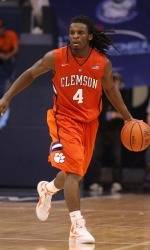 QUICK FACTS  Clemson and Furman will meet for the 148th time on the hardwood on Friday. The Tigers hold a 96-51 advantage all-time in the series and have won 27 straight meetings dating to the 1977-78 season.  Furman is Clemson’s oldest rival in men’s basketball. The Tigers played the Paladins in the first game in school history on Feb. 9, 1912.  The Tigers come into the game having lost their last two games against College of Charleston and Coastal Carolina. Brad Brownell’s team is holding opponents to 56.5 points per game.  The Paladins enter the game with a 3-1 overall record, having last played on Sunday, Nov. 20. Furman defeated Loyola Chicago 63-51 at home. Furman’s only loss was to Mercer on Nov. 17, a 66-46 defeat at Timmons Arena.  Clemson’s two losses have come by a combined four points, with both games decided in the final minute of play.  Tuesday’s loss to Coastal Carolina was the first time an opponent scored at the buzzer to beat Clemson since David McClure’s layup lifted Duke to a 68-66 win in Durham in 2007.  Andre Young is coming off a season-high 20 points in the Tigers’ last outing. He ranks sixth among all active ACC players with 868 career points.  Young is the ACC’s active leader with 140 steals and is second among active players with 264 assists in his career.  Young is second in the ACC this season with a 6.3 assist-to-turnover ratio (19-to-3). He played 39 minutes against Coastal Carolina and had no turnovers.  Young has made at least one three-point goal in 38 of his last 39 games for the Tigers.  Rod Hall earned his first career start on Tuesday against Coastal Carolina and played a season-high 31 minutes, contributing four points, three assists and a charge drawn.  Tanner Smith has led the Tiger team in rebounding in three of the four games so far this season.  Smith also leads the team in field goal percentage (58.6) from a guard position.  T.J. Sapp has made at least one three-pointer in each of his first four games, and is atop the team in three-point accuracy at 46.2 percent.

GAME PROMOTION Friday’s game is designated as Public Service Appreciation Night. All Fire, Police and EMS personnel receive free admission by showing proper ID at the East Gate Box Office at Littlejohn Coliseum. The box office will open at 6:00 PM on Friday. Additional tickets for family members are available for $10 as part of this promotion.