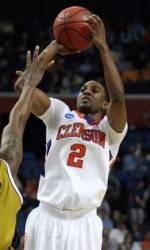 CLEMSON, SC – The men’s basketball team will play host to Belmont Abbey in an exhibition at Littlejohn Coliseum at 7:00 PM on Friday. The event will be free of charge and seating is general admission.

Friday’s game will mark the home debut of first-year Head Coach Brad Brownell and his staff. Brownell was hired on April 13 and carries a 167-85 career record in eight seasons at the Division I level. He spent four years at UNC Wilmington and most recently four at Wright State. He has taken three teams to the NCAA Tournament and his winning percentage ranks among the top 30 active coaches in Division I.

Brownell will welcome the return of three starters off last year’s NCAA Tournament team, including the starting point guard each of the last three seasons in Demontez Stitt. A veteran of 81 career starts and 94 games, Stitt needs just 98 points as a senior to reach the 1,000-point plateau as a Tiger. He also ranks among the ACC’s active leaders with 312 career assists and 120 steals. The other returning starters are Tanner Smith, who started all 32 games a season ago and Jerai Grant, who shot a team-best 63 percent and blocked 54 shots last year.

The Tigers return 11 lettermen overall, including top reserve Andre Young. He averaged 9.2 points per game off the bench last year and was tops on the squad in both three-point makes (60) and steals (54).

Belmont Abbey, located in Belmont, NC, is a Division II school that compiled a 15-14 overall record last season. The Crusaders return their top two scorers from the 2009-10 campaign. Richard Barbee averaged 19.3 points per game and shot 54 percent from the field, while Kyle Phillips averaged 13.3 and 5.4 rebounds per game.

The first game of the regular season will tip off on Friday, Nov. 12 against Western Carolina at 8:00 PM. For ticket information, call 1-800-CLEMSON or visit ClemsonTigers.com.