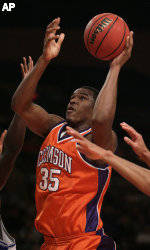 Clemson, SC – The Clemson men’s basketball team will host Augusta State in an exhibition game Tuesday evening at Littlejohn Coliseum. The game will tip-off at 7:30 PM. Admission to the game is free.

The game will be broadcast locally by WCCP-FM (104.9). Dan Scott will provide play-by-play, with Tim Bourret on color commentary.

The Tigers open the season with high expectations. Clemson is receiving votes in both the Associated Press and USA Today national polls. The Tigers return four starters and 11 lettermen from a team that won 25 games a year ago. Clemson was ranked as high as #14 in the nation last season while getting off to a school record 17-0 start.

K.C. Rivers is the team’s leading returning scorer at 14 points per game. He started just 10 games a year ago and is not considered a returning starter for the course of the season. Three other returning players averaged double figures last season, including seniors Cliff Hammonds and James Mays. A native of Cairo, GA, Hammonds ranked second in the ACC in assist-to-turnover ratio. Mays set Clemson frontcourt records for assists (95) and steals (69) in a single season in 2006-07. Trevor Booker also returns after averaging 10.4 points per game as a freshman last year.

The Jaguars of Augusta State are coming off a 65-63 exhibition win over College of Charleston last Thursday. Ben Madgen and Garret Siler combined for 45 points in the win.