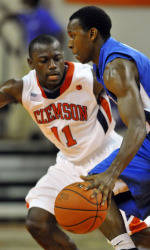 QUICK FACTS  Clemson and UNC Greensboro will play for only the second time in series history on Friday. In the only previous meeting, Sharone Wright produced a triple-double, one of four in school history. He had 21 points, 15 rebounds, and 10 blocked shots in the Dec. 12, 1992 game.

 The Tigers are currently riding a school record 10-game non-conference winning streak in road games. The streak dates to Nov. 12, 2006 when Clemson pulled out a 74-70 victory at Old Dominion. Clemson’s 10-game streak is tied for longest in the ACC with North Carolina.

 The Tigers have won both of their games this season by 40+ point margins. The last time Clemson won consecutive games by over 40 points was in 1986-87, when Cliff Ellis’ team actually won three straight games by such a margin.

 The Spartans enter Friday’s contest with an 0-2 record, but played Virginia Tech close in Blacksburg in their last game out. The Spartans have a tough schedule, with four ACC teams coming to Greensboro and six games against ACC teams overall. Both of UNCG’s losses have come to ACC foes, Duke and Virginia Tech.

 For the first time ever, UNCG will play all of its home games at the Greensboro Coliseum. The facility will also give Clemson’s players a glimpse of the ACC Tournament venue. None of Clemson’s current players have played a collegiate game in the coliseum. The last time the Tigers played at the Greensboro Coliseum was in the 2006 conference tournament.

 Clemson ascended to No. 22 in the Associated Press poll and No. 23 in the ESPN/USA Today coaches’ poll. Five teams from the ACC were ranked in the AP poll.

 David Potter is coming off a career-high 17-point game against Liberty. The senior forward hit 5-6 three-point goals and 6-7 shots overall. Potter’s previous career high was 12, in his very first game against Arkansas State in 2006.

 Trevor Booker had his first double-double of the season with 12 points and 10 rebounds at Liberty, the 22nd of his career. He leads all active ACC players in double-doubles, as well as rebounds (812) and blocked shots (207).

 Andre Young ranks first in the ACC in steals per game (4.5), and Clemson’s average of 19 per game is tops in the league.