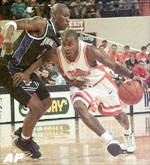 Clemson, S.C. – The tipoff for the Clemson vs. Western Carolina game is set for 1:00 PM on Saturday. Some published schedules list the game as a 7:00 PM start, but the game was moved for television in September. Please take note of the time for Saturday’s game, which will be televised by Fox Sportsnet.

November 29, 2000Clemson, SC–Clemson All-ACC guard Will Solomon has a sprained ankle, but should be able to play Saturday against Western Carolina. Solomon sprained the ankle in the second half in Clemson’s win over Northwestern on Tuesday night.

Solomon had x-rays, which were negative. He was on crutches on Wednesday for precautionary reasons.

The junior from East Hartford, CT scored 12 points in Clemson’s 57-44 victory. It was his 34th consecutive double figure scoring game, just two from the school record of 36 held by Vince Yockel from 1955-57.