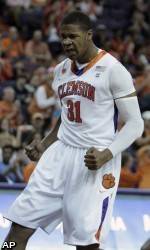 CLEMSON, S.C. (AP) – Devin Booker had a career-high 16 points and Clemson made coach Brad Brownell’s debut a success with an easy, 87-64 victory over Western Carolina on Friday night.

The Tigers won their 26th straight season opener as Brownell became the fourth consecutive men’s basketball coach to start his Clemson tenure with a victory.

Booker is the younger brother of former Tigers star Trevor Booker. Devin continued the family’s legacy of dominance in the middle for Clemson.

Brownell came from Wright State, hired after Oliver Purnell surprised his players and Clemson officials by leaving for DePaul.

The Tigers had gone to the last three NCAA tournaments and were a solid bet, under Purnell, to make that four in a row – unprecedented in school history.

Brownell spent much of preseason camp tamping down expectations. His motion offense would take time to click, he explained, and the Tigers did not have an identifiable second scoring option behind senior point guard Demontez Stitt.

But just like they had the past four seasons, Clemson called on a Booker to lead the way.

Whispers popped up after Purnell’s departure that Booker, just a sophomore, wouldn’t stick around either. But Booker liked what he heard from Brownell and went about the offseason trying to make himself just as big a force for the Tigers as his all-ACC older brother was.

Booker’s inside basket soon after put Clemson ahead 11-5. By the time Booker threw down a left-handed jam, the Tigers were up 36-24 and cruising.

Booker brought the house down at Littlejohn like his brother usually did, jamming home Cory Stanton’s missed shot for a 63-40 lead with 11 minutes left.

Brownell, labeled on billboards near campus as “The New Face” of Clemson basketball, took most of it in stride. Brownell smiled at the courtside fans waving cardboard cutouts of his face on sticks.

He shouted orders to “Attack!” even with Clemson ahead 79-48. Brownell stop his players on the way to the bench for one-on-one instruction.

Stitt, Clemson’s leading returning scorer, wasn’t much of a factor in this one. He picked up two fouls six minutes into the game and sat the rest of the half. Stitt got two more the first three minutes after the break and didn’t get back in until the final seven minutes.

The Catamounts entered this year off their first 20-win season since joining NCAA Division I in 1976-77. However, they fell to 0-11 alltime against Clemson.