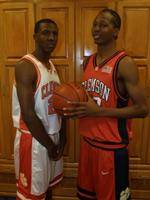 Mays, a 6-9, 215-pound forward from Garner, NC, enters his final high school season as the #85 player by Insidershoops.com, the #95 player by PrepStars and #94 by Rivalshoops.com. He is also listed as the #27 power forward in the Rivals150. Mays averaged just under 20 points per game, 12 rebounds, three blocks and 3.5 assists per game for Garner High School in 2002-03.

Moore enters his senior season as the #87 player as rated by Insidershoops.com, and is listed at #99 by PrepStars. He also ranks as the #12 prep (fifth-year) player by HoopScoop, and is the #13 small forward by Insidershoops.com. The 6-6, 190-pound small forward has also played point guard during his high school career. In 2002-03, Moore averaged 14.5 points per game, playing both the point and the wing positions at West Nottingham High School (Colora, MD). He will play his senior season at South Kent Prep in South Kent, CT.

A forward from Piedmont, SC, Perry is ranked #68 by PrepStars, and is regarded as the second-most highly ranked recruit in South Carolina. Perry caught the eye of basketball analysts in July, after an impressive AAU National Tournament in which he faced some of the top forwards in the nation. The 6-5, 190-pound Perry plays high school basketball at Woodmont High School, and helped the Wildcats to a 24-3 record and the semifinals of the South Carolina Class 2A state tournament a year ago. He averaged 17.2 points, 12 rebounds and two blocks per game during the 2002-03 season.

The Tigers’ 2004-05 class is ranked among the top 40 by three services, including 25th by Insidershoops.com.