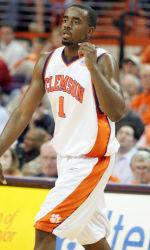 Men’s Basketball set to take on Maryland on Saturday

 Clemson tied the school record for consecutive wins at the start of a season and at any point in a season with its victory at NC State on January 9. Clemson also had a 17-0 start to the 1986-87 season, Horace Grant’s senior season. A win at Maryland will establish a school record for consecutive wins and best start to a season.  Clemson has won five consecutive road games, the first time the Tigers have done that since the 1996-97 season. A victory at Maryland would give Clemson a six-game road winning streak, its longest since the record eight-game road winning streak in 1986-87.  Clemson has won four consecutive games against Maryland under Oliver Purnell, the longest winning streak in the series for the Tigers since 1949-51. Purnell is 5-2 in his coaching career against Maryland, 4-2 at Clemson and 1-0 at Maryland.  Clemson is the only undefeated team left in college basketball. When Oregon defeated #1 ranked UCLA on Jan. 6 it made the Tigers the last undefeated standing.  K.C. Rivers has scored in double figures in every game this year even though he has not started. His 17-game streak of consecutive double figure scoring games as a reserve is a Clemson record, breaking the previous record of seven in a row by Dale Davis in 1988-89. He had 20 points to lead the Tigers in scoring against Georgia Tech.  Clemson has won its first three ACC games for the first time since the 1996-97 season and for just the fourth time in school history. The other seasons were 1979-80, 1986-87 and 1996-97.  A victory at Maryland would give Clemson three consecutive ACC road wins. Clemson has not won three straight ACC road games since the 1996-97 season when Clemson won at Virginia, Florida State and Maryland to open the season.  Clemson forward James Mays has played in 28 consecutive Clemson victories. Vernon Hamilton needs just six points to reach 1000 for his career. When he does so he will become just the seventh point guard in Clemson history to reach 1000 points, the first since Edward Scott.  Clemson’s #14 ranking in USA Today is the program?s best since a #14 ranking in AP on December 28, 1998.  A win at Maryland would give Clemson two ACC road wins in the same week for the first time since 1996-97 when Clemson won at Florida State (Jan. 11) ad at Maryland (Jan. 15). Clemson has had two ACC road wins in the same week just four times.  Clemson has had just eight turnovers each of the last two years.