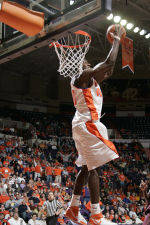 Through games of Wednesday, November 22, Clemson was ranked19th in the Sagarin computer rankings in basketball and football.Through games of November 22, Clemson and Maryland were the onlyteams in the nation to win at least six games. Clemson has won itsfirst six games for the second straight year. The Tigers won theirfirst 11 games last year. This is the third time in the last 10years Clemson has won its first six games of the season. K.C.Rivers is the only Clemson player to score in double figures inevery game so far this season. He has done it without starting asingle game. Rivers has a 12/3 assist/turnover ratio over his lastfive games. Clemson senior point guard Vernon Hamilton now has 212steals in his career and just 199 fouls. He has 11 steals and justsix foulds this year. Hamilton has nine assists and just twoturnovers for his last three games. He has played 93 minutes.Clemson has won six games in the month of November. Another victorywould give Clemson seven wins in November for the first time inClemson history. The 1998-99 Clemson team won six games inNovember. Cliff Hammonds scored 20 points to lead Clemson inscoring in the 69-66 win over Mississippi State. It was his first20-point scoring game since he had 21 against Wake Forest onJanuary 11, 2006. It was the fifth 20-point scoring game of hiscareer. Freshman Trevor Booker leads the team in field goalpercentage with a 67.5 figure (27-40). He has shot at least 50percent from the field in every game and at least 66.7 percent infive of the six games. Clemson and Charleston Southern have onecommon opponent so far this year. Clemson defeated the Paladins67-58 and Charleston Southern lost to Furman in the season opener,88-69. Charleston Southern has two players averaging in doublefigures who were not in the starting lineup in the most recent gameagainst Asbury. Donnell Covington averages 12.0 points per game andhas a 31/10 assist/turnover ratio, while Dwayne Jackson has a 13.0average and pulls in 5.4 rebounds per game. James Mays is comingoff his second double-double of the season. The junior who hasplayed in 17 consecutive Clemson victories, had 12 points and 17rebounds in the win over Mississippi State. Clemson has a perfect17-0 record against Charleston Southern. It is the most victorieswithout a loss against any team Clemson has played in its history.The teams first played in 1975-76 when Charleston.