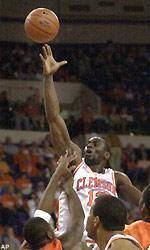 Clemson will open the second year of the Oliver Purnell era on Friday evening (November 19) at 8:00 PM when Hampton faces the Tigers for the first time at Littlejohn Coliseum. Clemson will be looking to extend its streak of season opening victories to 20 consecutive years when the Tigers take the court against the Pirates. Clemson has not lost a season opener since the first game of the 1984-85 season when Cliff Ellis, Clemson’s winningest coach in history, lost to Tennessee Tech in his first game as Clemson coach.

“We could go with a three-guard attack,” said Purnell at hisTuesday preseason press conference. “We see that in college basketball today all the time. I hope we have more versatility this year. We could go small and we could go big.”

The Tigers look to be more athletic this year with the addition of four freshmen. Hammonds, a 6-3 guard from Cairo, GA, is one of the newcomers. Freshmen Cheyenne Moore, James Mays and Sam Perry also figure to be among Clemson’s top nine players this year.

Vernon Hamilton figure to be the other starting guards if Clemson goes with the three-guard attack on Friday evening. Robinson was second on the Clemson team in scoring last year with a 10.8 average, but he averaged 18 per game in Clemson’s four wins over NCAA Tournament teams last year. He is seventh in Clemson history in three-point goal percentage with a .408 mark. Hamilton led the Tigers in assists and steals and averaged 7.3 points per game a year ago.

Clemson also looks to start the twin towers combination of 6-9 Sharrod Ford and 6-9 Akin Akingbala up front. Ford led the Tigers in scoring and rebounding last year, the first Clemson player to lead the Tigers in both categories in the same year since 1994-95 when Greg Buckner did it. Ford averaged 11.9 points and 7.2 rebounds per game and also contributed 64 blocks, second in the ACC and 21st in the nation. Akingbala started four games at the end of last season and averaged 4.8 points and 4.6 rebounds per game in just 17.5 minutes per contest.

Olu Babalola, a starter in 54 of the last 56 Clemson games, may come off the bench at a frontcourt or wing position. He has played exactly 709 minutes each of the last two seasons and figures to play his usual 25 minutes a game this year even if he comes off the bench. Babalola averaged 9.0 points a game last year and was the team’s top free throw shooter at 75 percent.

Hampton had a 13-17 record overall, but a strong 11-7 in conference mark last year under Bobby Collins, a 1991 Eastern Kentucky graduate, who is in his third year as the head coach of the Pirates. His team upset LaSalle in the season opener last year.

Brandon Streeter, who is no relation to the former Clemson football quarterback by the same name, is a 6-7 sophomore forward who will be playing in his first college game for Hampton. He had a double-double in their exhibition win over Francis Marion when he had 12 points and 11 rebounds.

Hampton is also expected to start Jared Woodley, a 6-1 senior guard who averaged 4.7 points a game last year, and Bruce Brown, a 6-11 center, who scored 7.9 points and outing last year.

This will be Clemson’s first meeting with Hampton, but the 18th time Clemson has faced a school from the MEAC. The Tigers are 16-1 against MEAC schools all time with the only loss coming to South Carolina State during the 1999-00 season.