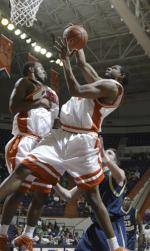 Purnell, Prosser Have Met 13 Times Previously While this will be the first time Oliver Purnell has coached against Wake Forest, it will not be his first meeting against Skip Prosser. In fact, the two veteran coaches have faced each other 13 times previously, all when Purnell was at Dayton and Prosser was at Xavier. All 13 meetings took place between 1994-95 and 2000-01.

It was certainly a homecourt series between the two schools when Prosser and Purnell faced each other. In fact, the home team won all 12 games. There was one meeting on a neutral court that was won by Xavier and Prosser.

Clemson vs. Skip Prosser Skip Prosser is in his third year at Wake Forest, but he has already coached against Clemson in five games, twice each, each of the last two years, and in the 1999 NIT while he was the head coach at Xavier.

The Tigers met Prosser’s Xavier team in Madison Square Garden and came away with a 79-76 victory in the semifinals of the 1999 NIT. That was Larry Shyatt’s first Clemson team and it was a victory over a 25-win Xavier team. It gave Clemson 20 wins for the season.

Clemson had a 40-29 lead at halftime, then extended the margin to 24 points in the second half before Xavier came back. Xavier actually took a three-point lead in the final minute, but Clemson made some clutch free throws to come away with the victory, Clemson’s only win in history at Madison Square Garden.

Terrell McIntyre led Clemson with 20 points on 7-11 shooting, including 4-7 on three-point shots. Tony Christie, brother of current Tiger Chey Christie, added 16 points on 6-10 shooting, while Harold Jamison added 16. Tom Wideman had the final double-double of his career with 10 points and a game high 15 rebounds.

Clemson defeated Prosser at Clemson in 2001-02 by a score of 118-115 in double overtime. So both of Clemson’s wins over Prosser have been by three points.

First ACC Road Game for Purnell Oliver Purnell will take his Clemson team on the road in league play for the first time on Saturday when the Tigers face Wake Forest in Joel Coliseum. Wake Forest is ranked fourth in the latest ESPN/USA Today poll and fifth by Associated Press. Thus, it will be quite a challenge for the Tigers.

While Clemson has won just 17.6 percent of its ACC road games over the years (just 59 wins in 50 previous seasons), Clemson has had three of its previous eight coaches win their first ACC road game. And, all three have come against top 10 teams.

Duke Downs Clemson in ACC Opener Second ranked Duke used an 11-0 run early in the first half and went on to a 73-54 victory over Clemson at Littlejohn Coliseum on January 3. It was the ACC opener for both schools and the first league game for Clemson head coach Oliver Purnell. It was the 16th straight victory for Duke by double digits over the Tigers.

Daniel Ewing scored 19 points off the bench and J.J. Redick added 17 points to lead the Blue Devils, who shot 47.7 percent from the field for the game, but just 32 percent on three-point attempts.

Clemson was led in scoring by Chey Christie had his third straight double figure scoring game with 10 points. Olu Babalola made just 2-7 shots, but did hit 5-6 free throws and added nine points.

It was an 8-6 game in favor of Duke with 14 minutes left in the first half. Then, Duke went on a 11-0 run to take a 19-6 lead at the 11 minute mark on two free throws by Daniel Ewing. That was the most important spurt of the game. Clemson cut the lead to 22-15 with 7:39 left in the first half on a follow up shot by Christie. Duke then stretched the margin to 42-29 at intermission.

Duke scored the first four points of the second half to put the margin to 17 points at 48-31 with 16 minutes left. The lead varied between 13 and 23 points the remainder of the game. Every time it appeared the Tigers might make a run, Ewing or Redick converted a three-point play.

Rice Productive vs. Blue Devils Clemson junior college transfer Lamar Rice had an 11-point scoring game against Duke in his first ACC game. Clemson’s first ever scholarship player from Michigan made 5-8 shots from the field, including a three-point goals, and had four rebounds, including three offensive, in a productive 22 minutes.

For the year, Rice has averaged 4.3 points and 2.6 rebounds per game. He is shooting 43.1 percent from the field and has made 7-24 three-point goals. However, Rice has played well against some tough opponents. He had his first double figure scoring game at a 20th ranked Purdue team in the ACC vs. Big Ten Challenge. He had 11 points in that game, again on 5-8 field goal shooting. He had his season high 14 points against Georgia in Philips Arena, including a career high three three-point goals.

Ford, Hobbs in Top 10 in FG % Two of the top 10 field goal percentage shooters in Clemson history are on the current Tiger team. Sharrod Ford is ranked fourth at 58.21 percent, while Chris Hobbs is currently 10th at 54.16 percent. Ford moved on to the list with his five field goals against Duke on January 3. The minimum requirements for the list are 200 made field goals and Ford now has 202.

Hobbs stands just behind former teammate Ray Henderson, who is at 54.20 and just ahead of all-time great Tree Rollins, who is at 53.94 percent. Hobbs also now has 610 career rebounds and ranks 15th in Clemson history in that category. He needs 18 to tie Vincent Hamilton for 14th place. Hamilton is Clemson’s career rebound leader among guards.

Tigers Schedule Ranked #24 in RPI Clemson is ranked 51st in the latest RPI rankings through games of January 5. Clemson’s strength of schedule is ranked 24th in the nation, third best in the ACC. The Tigers have played a difficult schedule this year with non-conference games against Cincinnati, Purdue, South Carolina, Georgia and Boston College. The Eagles, who Clemson defeated on December 30, was ranked 13th in the nation in the latest RPI, prior to their win over undefeated Georgetown earlier this week.Obviously, Clemson’s strength of schedule will increase after this weekend’s game against #4 Wake Forest.