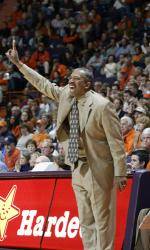 Maryland holds an 82-42 lead in the series with Clemson. TheTerps have dominated the series in College Park, winning 48 of the56 games. The Tigers did win there over a top 12 Maryland team sixyears ago (1996-97), and also won on Maryland’s Senior Day in1992-93. Clemson holds a 31-24 lead in games played in Clemson,including a 18-17 lead in games in Littlejohn Coliseum. That iswith Maryland winning five consecutive games at Clemson. Marylandhas won 11 straight against the Tigers, including both meetings thelast five years. Larry Shyatt was 0-10 in his five years as Clemsoncoach against Maryland. The Terps beat Clemson by double digits sixof the last 11 games, but by as many as 20 points just once. Lastyear Maryland won by five in the game at Clemson and by 39 in thegame at Maryland. The closest Clemson has come to beating Marylandduring this 11-game losing streak came in 1998-99 when Marylandbeat Clemson in overtime, 81-79. Andrius Jurkunas hit a jumper atthe buzzer to send the game into overtime, but he Terps came awaywith the win in overtime. Clemson swept Maryland in 1996-97, aseason in which the Tigers finished eighth in the final ESPNCoach’s poll, the highest final ranking in Clemson history. TheTigers won four out of five against Maryland between the lastmeeting of 1995-97 and the first meeting in 1997-98. Three yearsago the two teams met at Clemson and it was a high scoring affair.Maryland held a 59-56 lead at halftime before winning, 104-92.Clemson made 13 three-point goals in that game, led by Will Solomonwho made seven threes and scored 32 points. Chris Hobbs had adouble-double off the bench in just 22 minutes. The Tigers have woneight games in history in College Park, six of them in ColeFieldhouse. Clemson defeated a top 20 Maryland team in ColeFieldhouse twice. In the 1975-76 season, Bill Foster’s first atClemson, the Tigers downed Maryland 82-77 in one of the mostshocking upsets in Clemson history. Maryland was ranked second inthe nation entering the game and it is still the highest rankedroad win in school history. It was just Foster’s second ACC game asClemson head coach. One of the scores for Clemson in the contestwas a behind the back shot from the foul line during regular play,by Tiger guard Greg Coles. Tree Rollins, then a junior, had asignificant hand in that Clemson win. Clemson’s wins in ColeFieldhouse took place in 1961-62 (75-68), 1965-66 (81-69), 1975-76(82-77), 1986-87 (80-79), 1992-93 (81-73) and 1996-97 (76-70).Clemson also won in College Park in 1939-40 (48-30) and 1949-50(60-55).

Last Year vs. Maryland Maryland 52, Clemson 47January 25, 2003 at Littlejohn Coliseum Drew Nicholas scored 14 points, including eight straight during the final four minutes of the first half to lead 12th ranked Maryland to a 52-47 victory over Clemson on January 25, 2003. Edward Scott led the Tigers with 16 points, while Olu Babalola added 12. Those were the only three players to score in double figures in the defensive struggle.

Clemson held Maryland to 33.9 percent shooting, the best field goal percentage defense against the high scoring Terps all year. Maryland entered the game averaging 83 points per game, but scored just 52 against the Tigers, the fewest points scored by a Terp team since 1995. Clemson forced 20 Terps turnovers, the most committed by Maryland all year.

But, Maryland countered with an outstanding defense, allowing Clemson to shoot just 31.8 percent, Clemson’s worst shooting performance of the year to that point and the second lowest over the entire season. Clemson entered the game first in the ACC and 12th in the nation in field goal percentage. The Terps forced 19 Clemson turnovers, tying the most by a Clemson team all year. Maryland had 16 steals defensively, most against a Larry Shyatt coached team. All 10 Maryland players who participated had at least one steal.

Maryland also beat Clemson on the boards by 10, the best rebounding performance against Clemson all season. Tahj Holden, who had narrowed his college choices to Clemson and Maryland coming out of high school, had 11 rebounds for the Terps. Clemson was led by sophomores Olu Babalola with seven apiece.

Clemson jumped out to leads of 7-0 and 21-9. Maryland made just 1-12 from the field to open the game, including 0-8 on three-point shots. But, the Terps went on a 15-0 run late in the first half. They used a strong defense to force Clemson turnovers and took a 24-21 lead at the 1:27 mark on a field goal by Nicholas. It was the most consecutive points scored against Clemson all year.

Clemson did not have a hangover from the run to open the second half. Clemson took the lead at 27-26 with 16:10 left on a free throw by Olu Babalola. But, Maryland went on a 9-0 run to take a 35-27 lead at the 12:59 mark. Clemson went from the 12:32 mark to the 4:15 mark without a field goal, but hung in the game by making free throws. Maryland was called for nine fouls to just one on Clemson to open the half.

A three-pointer by Scott pulled Clemson to within 46-41 with 4:15 left. He made two free throws with 1:08 left to pull Clemson within 50-47. The Tigers got the ball back down three points with 22 seconds left, but Scott’s three-point attempt missed and the Terps held on to the victory.

Maryland 91, Clemson 52Feb. 25, 2003 at College Park, MD Maryland broke open a five-point halftime lead with a 27-4 run to open the second half and went on to a 91-52 victory over Clemson at the Comcast Center on Feb. 25. It was the second straight win of at least 39 points, the third straight at home by at least 23 points for the Terps.

Clemson made an 18-6 run to close the half and trailed by just 36-31 at halftime. But the Terps made six consecutive three-point goals to put the game away. Drew Nicholas and Steve Blake were both playing in their final home game at Maryland and both scored four three-point goals to lead the Terps on-slaught.

Ryan Randle actually led Maryland for the game with 18 points, while Blake added 14 points and seven assists. Nicholas and Jamar Smith scored 13 apiece for the Terps, who shot 63 percent from the field, highest against a Larry Shyatt coached Clemson team. The Terps hit 12-20 three-point goals and the .600 shooting was the best three-point shooting against Clemson since the 1997-98 season when Gonzaga hit 14-19 (.737) in a game played in Alaska. The Terps had 29 assists against just 14 turnovers.

Clemson was led in scoring by Edward Scott scored 11 and had five assists and four steals. He played a season low 34 minutes. Chey Christie added 10 points.

Purnell, Bradley Both Coached at Maryland Clemson head coach Oliver Purnell was born in Belin, MD in 1953 and coached for three years at the University of Maryland. Purnell coached under Lefty Driesell in 1985-86 when the Terps had a 19-14 record and advanced to the second round of the NCAA Tournament. He then coached two seasons under Bob Wade. In the second year Maryland advanced to the second round of the NCAAs with an 18-13 record. Purnell left Maryland in 1988-89 to become the head coach at Radford.

Dr. Ron Bradley, Clemson associate head coach, was at the University of Maryland from 1981-90. Bradley served as a volunteer coach from 1981-83, then became a full-time assistant coach under Lefty Driesell for the 1983-84 season. When Maryland met Clemson in 1983-84, the two teams played the only triple overtime game in the history of Littlejohn Coliseum. Bradley was an assistant coach on the Maryland bench for that game.

Purnell 1-0 vs. Maryland as Head Coach This will be Oliver Purnell second game as a head coach against Maryland and Gary Williams. Purnell led Dayton to a 77-71 victory over Maryland in the third place game of the 2000 Maui Invitational. That was a big victory for the Flyers and Purnell, as that Maryland team went on to the Final Four in March. Maryland was ranked sixth in the nation entering that game in Hawaii.

Virginia 61, Clemson 50 Virginia outscored Clemson 18-7 over the last 5:29 of the game and went on to a 61-50 victory over Clemson Tuesday night at University Hall in Charlottesville, VA. The victory improved Virginia to 12-4 overall, 2-3 in the ACC, while Clemson fell to 8-8 overall and 1-4 in the ACC.

Clemson was led by senior Chris Hobbs, who had 13 points on 6-9 field goal shooting. He was the only Clemson player in double figures. Olu Babalola and Sharrod Ford added seven points apiece.

Clemson won the rebound battle 41-31 led by Ford’s nine and Babalola’s seven. Clemson had 20 offensive rebounds, a season high for the Tigers in an ACC game. Babalola led the Tigers in assists for the second straight game with four against just one turnover. He now has nine assists and just one turnover over the last two games.

The game was a defensive struggle most of the contest. The Tigers shot just 31.6 percent from the field for the game, their low percentage of the year, and made just 2-18 three-point shots. Clemson committed 23 turnovers, but forced 19.

“I don’t have a problem with the way we played defense, or with our effort in general,” said Oliver Purnell after the game. “We just have to hit more shots and improve in our ball handling on the outside.”

Clemson jumped out to a 20-14 lead in the first half with 2:37 ;left on an inside score by Hobbs. But, Virginia scored the last six points of the half to tie the game at intermission. Clemson shot just 8-32 in the first half, but stayed in the game thanks to defense and rebounding. Clemson had a 25-16 rebound lead at halftime and had seven steals on defense, including a career high three by Akin Akingbala.

The strong defense by both teams continued in the second half. Virginia took an eight point lead at 43-35 with 7:15 left on a score by freshman Gary Forbes. But, Clemson responded with an 8-0 run of its own on a three-point goal by Chey Christie, a layup by Ford and a three-point goal by Robinson, whose shot with 5:29 left tied the game at 43.

But, the Cavaliers scored the next nine points behind the inside play of Minter and the outside shooting of Reynolds. Virginia made 3 of its four field goal attempts and 8-10 from the foul line inside the last five minutes, while Clemson made just 2-9 from the field and 3-7 free throws for the final five minutes.

Hamilton has averaged 8.2 points, 4.2 rebounds and 3.6 assists per game so far this season. He has shot 39.8 percent from the field, 60.5 from the foul line and has a 1.10 to 1 assist-turnover ratio. A comparison with the other first-year freshman starting point guards tells us that Hamilton’s scoring average is third, his rebound average is first, and his assist average is first. It is interesting to note that Hamilton’s stats are better than Scott’s freshman stats in scoring, rebounding, assists, and field goal percentage. Scott became a first-team All-ACC selection as a senior.