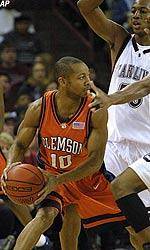 COLUMBIA, S.C. – Carlos Powell, South Carolina’s leading scorer held in check by Clemson most of the game, hit a 3-pointer to spark a late 15-1 run and lead the Gamecocks to their third-straight victory against their in-state rival, 76-59, on Wednesday night.

Powell tried a second attempt once the Gamecocks got the ball back, but his long miss was put in by teammate Chris Warren and things fell South Carolina’s way down the stretch. When Tony Kitchings rolled in an inside bucket with less than two minutes to go, the Gamecocks were up 63-50 and on the way to their second-straight win after a seven-game losing streak.

Chuck Eidson led the Gamecocks (9-11) with 20 points and Chris Warren added a career-high 17.

For Powell, who averaged nearly 14 points a game coming in, his big shot was his only field goal of the contest. He finished with 5 points for South Carolina, which went 26-of-34 from the free throw line to put this one away.

Edward Scott scored 15 of his 21 points in the second half, but Clemson lost for the sixth time in its last seven games.

Both teams looked to this nonconference contest for a bit of late-season momentum. The buzz was that Clemson’s stellar defense – it held Duke to 65 points in a loss this past Sunday – would give South Carolina’s spotty offense trouble.

But it was the Gamecocks who started the game with a big run.

Clemson used its deliberate walk-it-up attack to get back in it. Scott’s second 3-pointer capped a 19-9 run that brought the Tigers to 21-19. However, South Carolina caught fire again in the last five minutes of the half.

But Clemson got to just one point down twice. Scott’s two foul shots cut the lead to 43-42. But Rolando Howell hit two foul shots and Warren a short jumper and a 3-pointer to extend the lead.

Again the Tigers appeared ready to make it a nail-biting end at 50-49 on Scott’s foul shots. But South Carolina went on to its third-highest point total of the season.