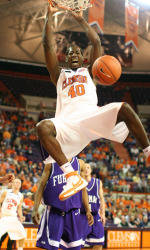 Clemson, SC – The Clemson men’s basketball team is listed #1 in the latest computer ratings by Jeff Sagarin. The Tigers moved to 2-0 for the season following Thursday night’s 84-82 win over Mississippi State on the road. It marks the second straight year the Tiger program has been rated #1 at some point in the season by Sagarin.

Clemson has been rated #1 by Sagarin on four different occasions, with the most recent prior to Oliver Purnell’s tenure being the 1996-97 season. The Tigers were also atop the ratings in December of 1986, when Cliff Ellis’ squad won its first 17 games of the season.

The Tigers return to action Sunday, November 18 to face Old Dominion. Tip-off is scheduled for 2:00 PM from Littlejohn Coliseum.